Top Posts
Hot Port News from GAC
MarISOT
Don’t take chances where your health is concerned…
Favourites struggle to exert their dominance on a...
World Sailing prepared to deliver a safe and...
Enormous success for Artcurial in Monaco…
Hot Port News from GAC
Measuring boats: it’s not a popularity contest
How to Watch The Olympic Racing
Trichet calls for ‘progressive, orderly change’ in reserve...
Hot Port News from GAC
New EU Polarnet 2 Survey on Polar observing...
Smart operations:Driving a lower carbon future – call...
Home NewsAt the end of the day... The MT “Prestige” Master, Captain Mangouras, Innocent of Environmental Crime
At the end of the day...Classification SocietiesEarthquakes, Tsunamis, Cyclones and TyphoonsEnvironmentFlagsLegalMaritime AccidentsOcean ShippingOceanologyPeople and PlacesPollutionSafety and SecuritySalvage, Towage, Wreck Removals

A Spanish court found the crew of the M/V Prestige and the Spanish Merchant Navy not guilty for criminal responsibility of the sinking of the oil tanker on November 13, 2002. It was Spain’s worst ever environmental disaster. (source: Captain Frank Marmol)

The Prestige sank off Spain’s northwestern coast and polluted thousands of miles of coastline and beaches in Spain, France and Portugal – prompting Spain to close its fishing grounds for about six months. The single-hull tanker was transporting about 77, 000 metric tons of heavy fuel oil.

Initially, the ship’s master Apostolos Mangouras requested a place of refuge for the tanker, which had a crack in its hull. But Spanish authorities denied him sanctuary and instructed the captain to take his ship further out to sea. The French and Portuguese government also denied the assistance as it floundered at sea.

The integrity of the single-hull quickly deteriorated, and a severe storm eventually broke the starboard hull off and subsequently spilled its cargoes. On November 19th, the hull split in half and spilled its entire cargo off Spain’s coast.Prestige’s master was taken into custody for ‘not cooperating’ with salvage crews and causing environmental damage. 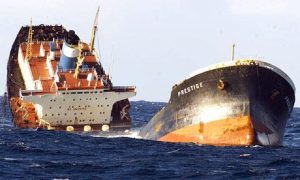 After an 11-year judicial investigation, the Galician region’s high court said in a verdict and sentence that the disaster was partly due to the 26-year-old tanker’s poor state of repair. The sovereign nation of Spain was also unsuccessful in suing the classification society ABS for the condition of the ship.

Three judges of the Galician Spanish High Court concluded it was impossible to establish criminal responsibility and Captain Apostolos Mangouras, Chief Engineer Nikolaos Argyropoulos and the former head of Spain’s Merchant Navy,  Jose Luis Lopez, were found not guilty of crimes against the environment. Lopez was the only government official charged in the case. Mangouras, 78, was found guilty of a lesser charge of disobedience and given a nine month suspended sentence.

After a storm damaged one of its fuel tanks, the Prestige drifted for days at sea with 77, 000 tonnes of heavy fuel oil on board. The captain was accused of disobeying government authorities who wanted the 26-year-old tanker as far from the coast as possible. That decision was correct, the court said.

“The Spanish authorities had the correct advice to evaluate the hypothesis on whether or not the tanker should be moved away from the coast, ” said Chief Justice Juan Luis Pia, as he read the verdict and sentence out loud in a televised court hearing. Judges said the leak was caused by deficient maintenance which the crew did not know about.

Bengal Crewing is promoted, managed and owned by highly qualified mariners, having adequate exposures and experiences in ship operation and crew management.