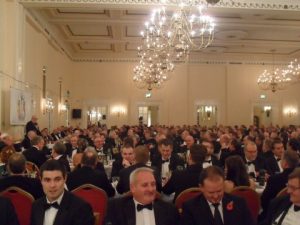 This is what I call a full house…!

The 101st Plumbers’ Ball held on 15 November 2013 at the Britannia Adelphi Hotel, Liverpool, by Jean Winfield of Jeanius Consulting

Officially known as the Liverpool Marine Engineers’ and Naval Architects’ Guild Annual Banquet, the Plumbers’ Ball is a significant social event for the Liverpool and North West shipping community.

For 2013, this popular and historic black tie event attracted over 650 guests from the UK and beyond.  The guests not only represented a diverse selection of industry people but also a healthy mix of generations from within the maritime sector.

It was encouraging to see an increase in the number of women attending the event this year, with WISTA-UK showing particularly strong support.

This year’s event also heralded a landmark for the Guild as Maria McCaffery, Chief Executive of Renewable UK, was the first lady to be invited to speak at the Annual Banquet.  As well as passing on some fascinating facts about renewable energy, she gave a moving personal account of her background within the local shipping community.

Dick Welsh, Director of IoM Shipping and Ray Luukas, Senior Partner of Brookes Bell LLP added their own style and humour to the evening whilst Arthur Todd, Guild Chairman, brought the proceedings to a close with his well chosen words about the work of the Guild and its members.

l to r: Li Watton, Sue Harvey, Maria Dixon – Chairman WISTA-UK, Gianna Molica-Franco, Martine Frost and Jean Winfield; to the right of Ms Winfield – back row: Lynn Cook and Anneley Pickles and in the front row again on her right: Maria McCaffery and a guest

To the right of Jean – back row: Lynn Cook (not a member of WISTA); Anneley Pickles

Speaking at the event Maria Dixon, President of WISTA_UK said “This is the first time WISTA-UK has been invited to the Ball and it has been wonderful for members from across the UK to forge links.  It has also provided the perfect opportunity to show that WISTA-UK is more than just a London centric organisation and we look forward to more events like this in the future”.

The Guild is a registered charity which was founded in the 1890s for the purpose of providing financial assistance to anyone who had served in the Marine Engineering or Naval Architecture professions in the Merseyside/Manchester areas, or their dependents, in the event of serious financial hardship.

The Guild is run entirely by honorary officers so that practically all its income is used for the provision of benefits.

The Plumbers’ Ball plays an important part in raising funds for the Guild as well as providing a wonderful opportunity for old friends to meet up and for new friendships to be forged.

This year’s event was no exception and the festivities continued into the small hours of the morning!