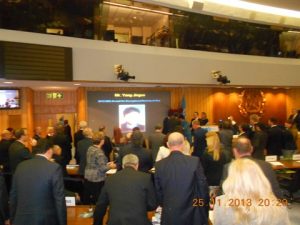 A standing ovation for one of the winners Mr. Jinguo Yang (posthumously), pictured in the megaframe, a very touching moment

Aviation Survival Technician Second Class Randy J. Haba and Aviation Survival Technician Second Class Daniel J. Todd of the United States Coast Guard Air Station Elizabeth City, North Carolina, were nominated by the Government of the United States, for responding to a distress alert from HMS Bounty, during the pre-dawn hours of 29 October 2012, and overcoming the effects of cold, fatigue and ingesting sea water to deliver 14 crew members of HMS Bounty to safety, during Hurricane Sandy.

Mr. Yang Jinguo, a crewmember on the ferry Tong Chang Qi Du 11, was nominated posthumously by the Government of China, for sacrificing his own life while trying to rescue a person in distress on the ferry, after it had collided with the cargo ship Shun Qiang 28.
The winner’s widow, Mrs. Gu Meiying, received the certificate and award on his behalf.

Mr. Yang Jinguo
On 15 March 2012, the ferry Tong Chang Qi Du 11 collided with the cargo ship Shun Qiang 28 on the Yangtze river. The ferry’s hull was damaged and, despite the assistance of two rescue ships, the vessel immediately began to sink. There were 33 persons on board, 31 of whom were subsequently saved during the search and rescue operation and transferred to a rescue ship. But one passenger was trapped. A lorry driver, whose vehicle had been severely damaged in the collision, was unable to force his way out of his truck.

But then, Mr. Yang, aged 55, one of the crew members from the stricken ferry who had already been rescued and brought to safety, decided to act. Mr Yang jumped back onto the sinking ferry and attempted, repeatedly, to prize open the jammed door of the truck in order to rescue the trapped passenger. Unfortunately, the ferry lost its stability and capsized. Mr. Yang was unable to save the passenger’s life and, in the process of trying, tragically gave up his own. Although he had the opportunity to escape at the last moment, he chose instead, at the cost of his own life, to stay and spend his final moments selflessly attempting to rescue the trapped passenger.

Two hours later, Mr. Yang was found by an offshore rescue team in the Yangtze River.

On that fateful March night, Mr Yang displayed truly extraordinary bravery and concern for the passengers aboard his vessel. He is a worthy recipient of the 2013 IMO Bravery Award for his actions which went far beyond the call of duty, at great risk and danger to himself, and eventually cost him the ultimate price. 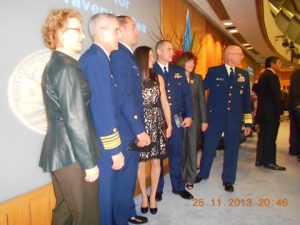 AST Rundy J. Haba and AST Daniel Todd (3rd and 5th from the left with members of their families and colleagues from the USCG and the American delegation

ASTs Haba and Todd
On October 2012, the replica sailing ship HMS Bounty became caught up in the deadly path of Hurricane Sandy. Shortly before first light, the ship was sinking, but the crew managed to put out a distress call – a call that was heard by the United States Coast Guard Air Station Elizabeth City, in North Carolina. Two rescue helicopters were immediately dispatched. Aboard them were aviation survival technicians Randy Haba and Daniel Todd.

After flying through the outer bands of Hurricane Sandy, in strong winds and torrential rain, they found the ship, partially submerged within a large debris field, and surrounded by life rafts.

AST Haba was the first to arrive at the scene. Descending into the stormy waters, he spent an hour battling strong currents and 10 metre waves, in driving wind and rain, taking survivors from the life rafts to the waiting rescue basket. Overcoming exhaustion and fatigue, AST Haba demonstrated the utmost determination and perseverance, performing two more rescues without the use of a mask. He exhibited exceptional strength and endurance throughout the entire rescue.
His colleague, AST Todd, arrived 30 minutes later and immediately deployed into the turbulent sea to begin the task of reaching another life raft. He began straight away to extract stricken survivors from the raft and deliver them to the safety of the rescue basket.

His strength and ingenuity expedited the rescue of the six survivors. By acting so promptly, he saved valuable time – time which he used to reposition himself to a second life raft, containing three additional survivors, whom he also successfully rescued.

Both men overcame the effects of cold, fatigue and ingesting sea water to deliver a total of 14 crew members of HMS Bounty to safety.

Highly commended nominees
In addition to the Award itself, certificates were also presented to the following “highly commended” nominees or their representatives:

• the crew of the speedboat Zhongguo Yuzheng 44246, Dianbai Branch of Guangdong Fishery Administration General Brigade, nominated by China, for rescuing 11 crew members of the fishing boat Yuedianyu 53018, which had suffered engine failure, during a typhoon;

• Captain Vladimir Safonov and the crew of the M/T DS Crown, nominated by the United Kingdom, for rescuing 24 crew members of the container vessel MSC Flaminia which had exploded and was ablaze;

Letters of commendation have been sent to the following:

• the crew of the rescue helicopter B-7309, Beihai No.1, Rescue Flying Service, nominated by China;

• Captain Wing-Bu Lee and the crew of the M/V Jin Fu, Hong Kong Special Administrative Region (SAR), China, nominated by the Republic of Korea; and

Please play the video and listen to one of the most touching stories: