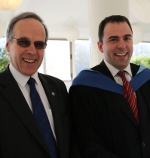 In November, Nautical Institute chief executive Philip Wake was honoured to be a guest of the World Maritime University at its 30th Anniversary Dinner and Graduation of the Class of 2013. The Class consisted of 106 Master degree students from many different countries. During the event Philip had the pleasure of meeting a number of NI members.

The Dinner, attended by over 250 dignitaries from around the world, was co-hosted by the City of Malmo and held in the magnificent Old City Hall. Various awards were presented including an Honorary Fellowship to Michael Grey FNI. Philip is a member of the IMO Secretary-General’s Advisory Group
on WMU Governance.