The Trinity House building at night

On 20th May, 1514 , a young King Henry VIII granted a Royal Charter to a fraternity of mariners called the Guild of the Holy Trinity “so that they might regulate the pilotage of ships in the King’s streams” and next year marks the 500th anniversary of this milestone event in British maritime history.   Included in the celebrations at Trinity House, home to the Corporation and the working office of the General Lighthouse Authority, is a discount for bookings for the month of May comprising £500  off the standard venue hire charges.

The history of the House is omnipresent and throughout the building, valuable paintings and antiques bear out the nation’s remarkable nautical heritage. Trinity House’s connection with seamarks dates from Elizabeth I and the Seamarks Act of 1566 which granted powers to set up “so many beacons, marks and signs for the sea whereby the dangers may be avoided and escaped and ships the better come into their ports without peril.” The first lighthouse was built during the reign of James I by Trinity House at Lowestoft in 1609, and the next 200 years saw a proliferation of light house building around the coast. 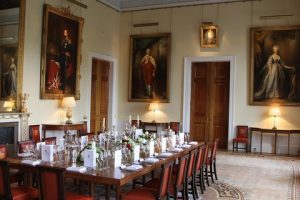 In its 200 year history, the building of Trinity House has welcomed royalty, prime ministers and Lords of the Admiralty and is today managed by Deputy Master, Captain Ian McNaught.  Reflecting the on-going patronage of the Crown, the current Master of the Corporation is HRH The Princess Royal, filling a role held in former centuries by, amongst others, the diarist Samuel Pepys, the Duke of Wellington, William Pitt the Younger and, more recently, The Duke of Edinburgh. 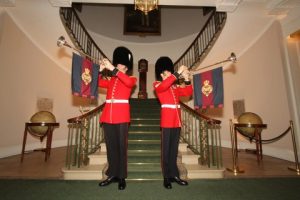 Trinity House is the working office of the General Lighthouse Authority (GLA) for England and Wales with responsibility for nearly 600 Aids to Navigation from traditional aids such as lighthouses, buoys and beacons to the latest satellite navigation technology. In addition, it inspects over 10, 000 local Aids to Navigation provided by port and harbour authorities and those positioned on offshore structures.The venue at Tower Hill pays a rent to the Corporation for its use which ensures, as in all other aspects of the two organisations’ finances, that the accounts of the Corporation and the General Lighthouse Authority are entirely separate and without crossover.

Incorporated by Royal Charter in 1514, the Corporation is also a major maritime charity, wholly funded by its endowments. The Corporation spends around £4m each year on its charitable activities including welfare of mariners, education and training, and the promotion of safety at sea. It is also a Deep Sea Pilotage Authority.  Please visit www.trinityhouse.co.uk  for more information.

Otesat-Maritel adds ECDIS by MARIS AS to its products portfolio