In Flanders fields, Great War commemorations will flow from 2014-2018

In Flanders fields, Great War commemorations will flow from 2014-2018,  By James Brewer

Visitors from near and far, including Commonwealth countries, will flock to northern Europe in 2014 to pay their respects to their forefathers and comrades who fell in the carnage of World War I. The victims perished a century ago  in many different ways: under enemy fire, from the first chemical weapons attacks in history, wasted by intolerable physical conditions, or through senseless ‘over the top’ battle tactics.

A four-year remembrance project beginning in October 2014 will see dozens of events, drawing in both tourists and today’s citizens, to highlight the scale of the slaughter of soldiers and civilians during the “war to end all wars.”

Much of the bloodshed took place in what quickly came to be known as Flanders Fields. Belgium is preparing for a big influx of visitors, and the tourism enterprise Visit Flanders was prominent among organisations during the huge World Travel Market in London in November 2013 detailing an extensive agenda for the Great War centenary. Flanders intends to use artistic representations as part of the retelling of the heart-rending epoch. In a clear sign of its determination to place the commemoration centre stage, Visit Flanders established itself as official premier partner of WTM 2013.

The European Commission is supporting several initiatives. Its European 2 Seas Programme, which has Euro167m to underpin co-operation between the coastal regions of France, England, Belgium and the Netherlands, is backing a network of arts-related sites focusing attention on the Great War. 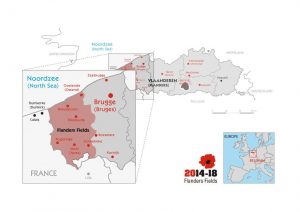 Much of Flanders was a battleground

One project, named Coming World/Remember Me, will seek to engage people from countries involved in the war in preparing a total of 600, 000 clay sculptures in workshops, over the course of the four years. The sculptures will be displayed in an installation by 2018.The project is a collaboration between conceptual artist Koen Vanmechelen and curator Jan Moeyaert.

The figure of 600, 000 has a strong resonance.  It refers to the number of casualties who died on Belgian soil during the conflict, 90% of them in Flanders fields Their names will be projected onto iconic sites, including the Albert I memorial in Nieuwpoort, the Yser Tower in Diksmuide, and the belfy in Ypres. 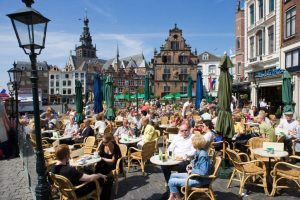 Because of the magnitude and chaos of the conflict, identification of many of those slain was difficult. Family members from all over the world already come in search of information. At the In Flanders Fields Museum, researchers have built a database of the names of the dead, with a brief description of each victim. Red Cross archives, national committees for war graves, veterans’ associations and local registers have also been consulted.

Experts have been collecting the names for three years and had amassed more than 500, 000 by late 2013.  “We are confident of reaching the target” of 600, 000, said an official during the World Travel Market. 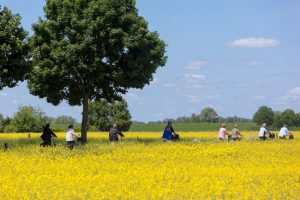 The collection is to be the basis of the Light Front ’14 project, which will be realised on October 17 2014, and is part of a broader initiative named GoneWest. A human Light Front will trace the front line as it was at the time of a ceasefire in autumn 1914. Troops from both sides could see each others’ lights along the front. In the first weekend of the initiative, 8, 750 people, mainly local, will recreate the light front, between Nieuwpoort beach and Ploegsteert. Artistic installations will be set up along the torchlit route.

The truce followed the flooding of the Yser plain by the deliberate opening of the locks at Veurne-Ambacht, Nieuwpoort, in a desperate measure to stem the German advance.

“The whole project is intended as a deeply reflective moment, with all attention being focused on the victims of the conflict, ” say the organisers of the Light Front. 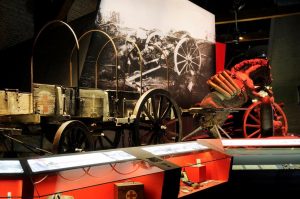 In Flanders Fields, a total of 1m soldiers were wounded, counted as missing or were killed in action. Tens of thousands of citizens fled, as cities and villages were destroyed. The landscape today contains hundreds of monuments and cemeteries of great historical significance for the people of many nations.

Communities will show how they were deeply affected by the catastrophe of war. At Poperinge, the focus will be on life behind the lines. Although occasionally bombed or bombarded at long range, it was the nearest place to Ypres which was reasonably safe. At first it was a centre for casualty clearing stations, but by 1916 these units had to be moved further away, and field ambulances took their places. The earliest Commonwealth graves in the town are in the communal cemetery. The Old Military Cemetery was made in the course of the First Battle of Ypres and the New Military Cemetery was established in June 1915. The latter contains 677 Commonwealth burials and 271 French graves.

In the centre of Poperinge the chaplains Neville Talbot and Philip “Tubby” Clayton opened a clubhouse in December 1915 where rank or status of those using it was irrelevant. Soldiers could enjoy rare moments of peace and entertainment there. A ‘Tubby’s Story Tablet’ will guide visitors through the renovated house and garden. 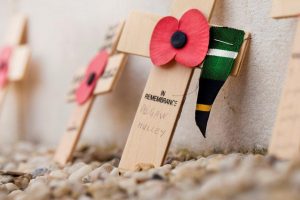 Wooden crosses with poppy. Copyright the In Flanders Fields Museum.

The courtyard of Poperinge Town Hall witnessed executions. In one of the death cells a cinematic impression is projected of a soldier awaiting his death. In another cell the graffiti left by prisoners is evident.

From 1915 until 1920 the hamlet of Lijssenthoek became the venue for the biggest evacuation hospital in the Ypres Salient. Today its military cemetery has a visitor centre narrating daily life in the hospital and how the cemetery was created.

Earlier in 2015, on April 22, there will be a solemn remembrance, in various locations along the Ypres Salient, of the first extensive use of chemical weapons in war.

A themed exhibition ‘War and trauma: Soldiers and Ambulances’ has already opened and will continue to June 30 2014 at two museums in Ghent and Ypres. The In Flanders Fields Museum in Ypres addresses the organisation of general medical care on the front; and the Museum Dr Guislain in Ghent examines the role of psychiatry in conflicts throughout the 20th century.

When the Great War began, none of the European armies had prepared to deal with the huge number of casualties, let alone treat them with dignity. Philanthropy, private initiatives and heroic dedication of a few individuals were left to make up for this shocking failure. 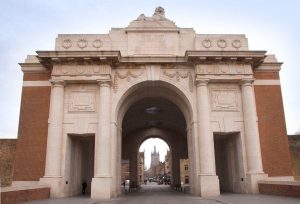 As the multitude of victims mounted, medical care improved, but the only lasting breakthrough was the reluctant recognition of the condition of psychological trauma.

On a lighter note and in tribute to the spirit of the individual combatants, each Wednesday from March 12 2014, Poperinge will organise a musical evening with dinner under the title The Soundtrack of 14-18.

In the Francophone swathe of Belgium, Mons Region Tourist Board is among those planning commemorations. Mons saw the first battle between British and German forces (the city of Liege was the first in Belgium to be invaded). In the peaceful St Symphorien cemetery lie the bodies of the first and the last soldiers to be killed in the war. There will be many more reasons to visit Mons, as it will be a European Capital of Culture in 2015.

In October 2014, events in Antwerp will recount what happened to the city’s civilians and artists during the war. When Germany invaded Belgium in August 1914, Antwerp acted as a safe haven for many civilians. The port city was considered the ultimate stronghold of the nation. Along with King Albert I, most top Belgian politicians moved there. When the battle front approached Antwerp, the city became a hive of activity: the construction of two pontoon bridges over the River Scheldt is credited with saving the lives of thousands of soldiers, including those in the British Expeditionary Force. 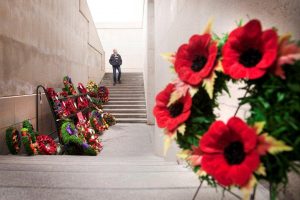 On the weekend of October 3-5 2014, the Belgian and Dutch armies will recreate the emergency by building a temporary pontoon across the river. On October 3, the pontoon will act be a platform for dance and music performances.

Continuing the refugee theme, an exhibition entitled Help the Belgians in the Museum aan de Stroom will tell the story of Belgian refugees abroad. The exhibition is a collaboration of the Netherlands, UK and France. The Museum aan de Stroom (which means ‘museum on the river’) was opened in May 2011 and within its striking red sandstone premises boasts thousands of exhibits on the history of the city and port.