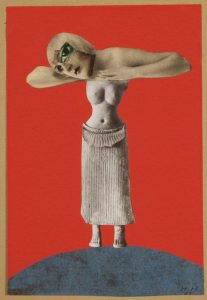 Nearly a century ago, in the midst of wartime, a radical young woman working for a staid Berlin publishing company issued a challenge – through the pages of a crafts magazine – to German women. They should use their embroidery skills to help them assert their gender rights and should give free rein to their artistic abilities, she insisted.

In her 1916 article in the magazine Embroidery and Lace for which she produced textile designs for 10 years, Hannah Höch declared: “Embroidery is closely related to painting. It is constantly changing, with every new style each epoch brings.  It is an art and ought to be treated like one.  If only people would pay a visit to an ethnological or craft museum to see what embroidery can really be. Women, lay claim to your rights (economic and moral) and know that your embroidery work is a documentation of your own era.”

Hannah Höch (1889-1978) was a New Woman in the sense of an independent-minded person who chafed at male-dominated society, but possessed acute political awareness on a wider scale. She has been grouped with the Dada school (a movement that challenged traditional artistic values, sometimes in a seemingly nonsensical way, albeit mainly male preserve) but more importantly as a pioneer of photomontage. Whitechapel Gallery in London has performed an immense service to 20th century art history by assembling the first major UK exhibition of her work. London is thus catching up with Paris, Berlin, New York and Madrid in that respect.

At the Whitechapel until March 23 2014 hang 127 of her works spanning six decades, a physical as well as organisational feat as many of the exhibits are fragile and are rarely released to travel outside their current homes.

How Hannah Höch would have revelled in 21st century technology, which offers a palette of countless photo images with which to play.

Born in the town of Gotha, Hannah studied in the German capital where she met fellow artist Raoul Hausmann, a member of the Berlin Dada movement and her partner until 1922. She worked in the patterns and fashion department of publishing house Ullstein Verlag, which ensured a lasting  interest influence of textiles on her work. She followed her own exhortation to develop embroidery into an art form, while with Hausmann, she was one of the pioneers of the art form that would come to be known as photomontage. “The peculiar characteristics of photography and its approaches, ” she wrote, “have opened up a new and immensely fantastic field for a creative human being.”

Her involvement with the Berlin Dadaists deepened just ahead of the ‘roaring twenties’ in Berlin, although her feeling for home crafts blessed her with a greater sense of form, texture and colour than many of her contemporaries. Für ein Fest gemacht (Made for a Party).1936. Collage. By Hannah Höch. Collection of IFA, Stuttgart

She was outspoken in her scorn for the collaborators of the ruling class, as shown in her montage Heads of State based on a summer 1919 magazine photograph of German president Friedrich Ebert and defence minister Gustav Noske in bathing trunks at a Baltic Sea resort which she set against a backdrop of flowery embroidery. Ebert and Noske had ruthlessly crushed a workers’ uprising in the first half of that year.

Hannah Höch travelled in Europe, forming friendships with Kurt Schwitters, Piet Mondrian and Theo van Doesburg, and beginning a relationship with the female poet Til Brugman.  One of her most biting works, alluded to in the chronologically-arranged current show, is the wonderfully-titledSchnitt mit dem Küchenmesser DADA durch die letzte weimarer Bierbauchkulturepoche Deutschlands ((Cut with the Dada Kitchen Knife through the last Weimar Beer-Belly Culture epoch of Germany).

She produced a series based on images from an ethnographical museum, deliberately flaunting the “imperfection” of the figures, a bold political position at a time when Germany was about to fall into the grip of the Nazis, with their notions of the Aryan bodily ideal. The collages in From an Ethnographic Museum blend figures of various ethnic types.

A room in the current exhibition is devoted to Höch’s Album, a 1934 scrapbook into which she pasted  complete images cut out from mass media publications, in contrast to the pieces of images used in her public work.

Though her collages were not included in the exhibition of so-called degenerate art in 1937, she was a marked lady having been categorised among those espousing “cultural Bolshevism.” She therefore spent the years of the Third Reich quietly at home in Berlin in what she called “internal exile, ” apprehensive over potential arrest and persecution, . 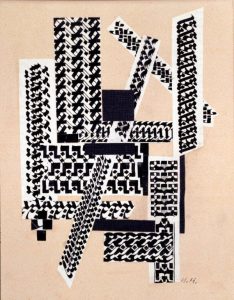 In 1945, she wrote: “Twelve years of extreme tyranny lie behind us like an endless night of terror.” Art, she said, had been turned into “a strumpet for an idea” She set to work again, in the 1950s and onwards using newly available print materials to create compositions based on the spread of consumer culture and mass entertainment. She retained her rebellious spirit to the end, and a fascinating documentary of her at work at the end of the exhibition shows her carefully snipping from magazines to create fresh collages, over each one spending several days.

This determined and courageous woman whose experiments embodied the spirit of the New Woman of the 1920 and 1930s have been little recognised in the last half century is being rightly celebrated by the Whitechapel. The curators for this show – Daniel Hermann, Prof Dawn Ades and Emily Butler – must be congratulated on an engrossing lay-out that allows the works mostly to speak for themselves.

Sale of the VLCC Luxembourg