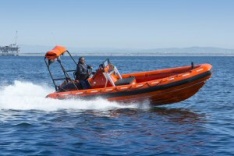 Each of the two 22-ft. fiberglass 670 FRBs is powered by an inboard 230 HP diesel engine and water jet and can carry up to nine passengers. The boats meet all prescriptive requirements of the international Safety of Life at Sea (SOLAS) treaty for passenger vessels and ro-ro ferries that travel on international routes.

“The AMHS has chosen Willard Marine as their preferred U.S. supplier for their ferries, confirming that our quality, purpose-built design continues to be the first choice for FRBs in the SOLAS market, ” said Ulrich Gottschling, president of Willard Marine.

Willard Marine is also supplying two U.S. Coast Guard-approved SEA FORCE® 490 SOLAS RIBs for the AMHS’ Fast Vehicle Ferry (FVF) Fairweather and FVF Chenega,  which service the Upper Inside Passage, Juneau and Sitka, Alaska. Delivery of the boats will take place in the spring and fall of 2014.

AMHS operates a state-owned commercial fleet of 11 vessels that run along a scenic 3, 500-mile route from Washington state to the Aleutian Islands.

Check out this cool website to browse similar products: http://www.nauticexpo.com/boat-manufacturer/rescue-boat-29.html