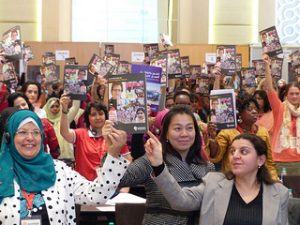 31 January 2014 – More than 270 ITF women from 80 countries met in Delhi, India this week to set the agenda for gender work ahead of ITF congress in August.

The conference, held once every four years, gives women transport workers the chance to build an action programme for 2014-18. Major themes discussed and debated during workshops and the wider plenary sessions were leadership, organising women to build union power, violence against women and our public transport services. You can view the theme document for the conference here >>

On day two the new ITF Action guide on violence against women was introduced to delegates. Download it here >>

Resolutions out of the conference included; an expression of solidarity with women workers at Qatar Airways facing intimidation and surveillance from management, to act to build support from male union leaders and a call for ITF unions to stand firm for gender justice to advance the demands and aspirations of women at work, in the community and in the union.

Women transport workers’ coordinator Alison McGarry said of the event: “I think it’s been a very successful conference. We’ve had sisters from across the globe sharing their experiences, whether it be about work or about violence, which is the most important issue at the moment for many of the sisters. It’s been an intense two days of discussion from which we’ve developed a real action work programme. I feel on many different levels it’s been an absolutely brilliant conference.” Watch this film for reaction on the conference from Alison and from ITF women’s committee chair Diana Holland >>   and get a full run down of coverage on the conference website >>

ITF and UNI turn over new leaf with DHL