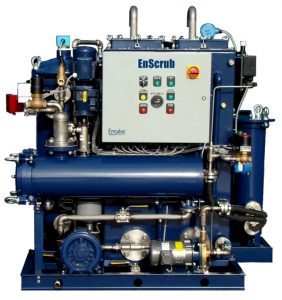 “Whereas SOx scrubber systems focus on the removal of sulfur oxides from engine emissions, harmful particulates and petroleum hydrocarbons end up in the aqueous effluent of these scrubber systems, ” explained Jason Caplan, president of EnSolve. “If this petroleum-tainted effluent is sent overboard, it can present an environmental and regulatory problem for the shipowner. The EnScrub system addresses these contaminants thereby reducing or eliminating the regulatory risk of discharging untreated SOx scrubber water overboard.”

In late 2012, EnSolve conducted efficacy testing of a prototype EnScrub System on effluent obtained from an SOx scrubber system at the Port of Long Beach, Calif. The analytical results indicated that the EnScrub system was successful in reducing more than 99 percent of the petroleum hydrocarbons from the SOx scrubber water effluent. Subsequent testing in 2013 confirmed the results of the 2012 Port of Long Beach field trial.

“It’s important to note, ” added Caplan, “that the EnScrub product is a complementary, not competitive technology for SOx scrubber systems. Our goal is to provide this add-on technology to SOx scrubber systems to help keep both the scrubber manufacturers and shipowners in compliance with domestic and international clean water regulations.”

EnScrub models are available for closed-loop, open-loop or hybrid applications.

Viewers can log on the attached  PDF of the EnScrub product sheet; log on here: EnScrub Product Sheet

About EnSolve Biosystems, Inc.
EnSolve Biosystems (www.ensolve.com) is a maritime equipment company based in Raleigh, N.C. EnSolve’s mission is to provide its customers with products that have both economical and ecological benefits.