The organisation’s canoeing initiative is a partnership between SAMSA and the seven times Dusi winner Martin Dreyer’s Change a Life Academy.

With steely determination the eight competed with 1800 participants, some international canoeists, with Mhlonishwa Hlongwane and Nqobile Makhanya clinching the 14th place coming in at 2:57 minutes. Newcomer and novices Mmeli Ndimande and Patrick Canham arrived in 3:45 minutes, ranked in the 130th place. 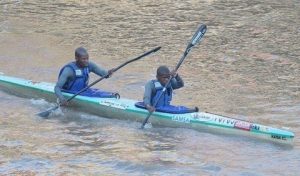 At the time of going to press Mhlonishwa Gcwensa and Sifundo Gumede had arrived about 30 minutes after the Shozi brothers. Their ranking had still not been confirmed.

It was a monumental effort on the part of the novices. Except for Hlongwane, this was the first time for the seven SAMSA Dusi canoeists took part in this international race.

Mapitso Dlepu, head of the SAMSA Corporate Social Investment programme which oversees this initiative was proud. “This is a remarkable feat for these young men. Having only trained for four months, it was not even imagined that they would proceed so successfully. They have confidence now that they are over with the first day. They are ready for day two and three and have learnt many lessons along the way.

“This gives SAMSA the confidence that this developmental programme we have started which is intensive and tracked almost weekly, is working.”

Martin Dreyer, training the SAMSA youth said: “I am proud that these young men and their canoes are intact. It was not easy out there. Some started later and the sun was hotter and the wind picked up. It’s no disgrace what number you are at. The fact is that they have put in lots of effort.

“This race is very physical. Mmeli and Patrick came out all smiles even though they had a terrible start. I think they are on the right track and can make one of the world greatest canoeists and become great role models for Inanda.”

It was important that the canoe partners communicated well, said Canham, as most of the canoeists often quarrelled because each had their own ideas on the river. “With Mmeli and I however, we were good with communication, and we understood that we had to work together.”

Ndimande said given the fact that it was their first Dusi, he felt proud of their performance.

A picture of a group of athletes

The SAMSA Change a Life programme is holistic in its approach to inculcate discipline, demystify the perception that black people are afraid of water, it aims to promote maritime safety, including combatting pollution, and moreover educate youth on water environment.

The race continues tomorrow where the canoeists will overnight at Inanda Dam.

From mine to finger