The Marseilles Fos port authority’s supervisory board has backed a French transport ministry proposal nominating Port of Dunkirk head Christine Cabau Woehrel as the new CEO in Marseilles.  Her appointment to the executive board will now be ratified by a ministerial decree.

Backing for the nomination came on February 14 when the supervisory board launched its latest five-year term by also electing a chairman and deputy chairman from the 17-strong line-up of governmental, industry, business and staff representatives.

The new chairman is 54-year-old financier Jean-Marc Forneri, who has served on the board since it was formed in 2009.  M. Forneri has been the founder chairman of leading French mergers and acquisitions specialist Bucephale Finance since 2004.  He previously held high-profile posts with ski equipment manufacturer Rossignol, the Worms conglomerate and the Credit Suisse banking group.  He has also acted as a political advisor on industry and finance since the 2008 world economic crisis. 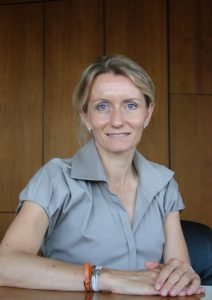 The deputy chair is supervisory board newcomer Delphine Andre, 47, chairman and managing director of the Charles Andre Group, the logistics, cleaning services and hotels company founded by her grandfather in 1932.  She has led the group since 2002 after previously working as a barrister.

The French port reforms of 2008 established a three-tier management structure of executive, supervisory and development boards.  A maximum of three further executive directors will be nominated by the new CEO for approval at an impending meeting of the supervisory board.  Membership of the renewed development board – composed of port professionals, union representatives and local authorities – will also be finalised in the coming weeks.

Jean-Marc Forneri studied at the Paris Institute of Political Science and the National School of Administration before joining the finance inspectorate at the French ministry of the economy.  In 1988, aged 29, he became managing director of world-leading ski equipment manufacturer Rossignol and drove eight-fold growth in six years.  He then spent two years heading development at Demachy Worms – the merchant banking arm of the Worms shipping, sugar, insurance and banking group – where his projects included the sale of state-owned container line CGM to CMA.

In 1996 he joined merchant bank Credit Suisse First Boston as managing director France, establishing the company as a mergers & acquisitions market leader with a string of mega-deals.  These included Total’s €52 billion acquisition of Petrofina and Elf – the biggest ever in France; the €43billion sale of Orange to France Telecom; and Renault’s first joint venture in Russia.  Subsequently he was appointed CSFB vice-chairman Europe.

He formed Bucephale Finance in 2004 and has again forged a market leading position with acquisitions involving household names such as Galeries Lafayette, Clarins and Carrefour and the creation of investment bank Natixis through a €24 billion merger.

Delphine Andre graduated as a corporate lawyer in 1990 and held company posts until joining the Valence bar in 1995.  After seven years she moved to head her Montelimar-based family firm, which employs 7, 000 in 14 countries and has an annual turnover of €939 million.  Apart from cleaning services and hotels, the four divisions include bulk and automotive logistics (see story below).

The Renault-Nissan car plant in Tangiers, Morocco, has chosen Marseilles Fos and automotive logistics specialist TEA – part of the Charles Andre Group – to handle imports of its Dacia brand for the French market.

Starting in April, more than 20, 000 Dacia cars per year will be received at a new import/export car terminal at the Brule-Tabac quay in Fos.  The port authority selected TEA to develop and operate the site last December following a call for tenders in November 2012.  The port already handles 220, 000 vehicles per year at two existing terminals.  The latest 14-hectare site, which features pre-delivery inspection facilities, will boost annual capacity by up to 60, 000 cars