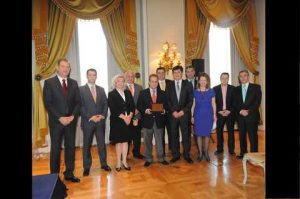 Many members members and guests joined the ceremony last Sunday with the presence of the majority of International PROPELLER CLUB (Port of Piraeus) Board of Governors, as well as prestigious guests such as  Mr. Athanasios Christopoulos, Secretary General of the Ministry of Shipping and the Aegean, Mr. David Lippeatt, Economic Counselor, as representative of the US. Embassy, Mr. Vassilios Michaloliakos, The Mayor of Piraeus, Mr. George Koumoutsakos, Member of the European Parliament, Mr. Efthymios Mitropoulos, Mr. Vlachos (PEPEN) and many others.

During the PITTA ceremony the PROPELLER Awards and Donation were presented as well as part of the scholarships, customized for years. Mrs. Yanna Pavlopoulou, on behalf of the Board of Governors advised that more awards are to be attributed by the end of May, since The PROPELLER CLUB is considering to widen its scholarship, internship and donation program.

The PROPELLER Club (Port of Piraeus) Award was presented to the Former President  of the Propeller Club (2011-2013) Mr. Antonios-Stamos Faraklas.

Propeller Club Donation was awarded to ELEPAP in order to continue to take care of the Club’s adopted child Athanassia, who now reached the 1st grade of ELEPAP elementary school. The award was received Mrs. Mariana Moschou, ELEPAP’s President.

A Propeller Club award was awarded to Ms. Maria Sarantopouloufrom the American College of Greece

A Propeller Club scholarship was awarded to Ms. Ellie Martin in cooperation with the American College of Greece.

A Propeller Club scholarship was awarded to Fulbright Foundation and was received by Mrs. Artemis Zenetou.

On behalf of the Archbishop, Father Vartholomeos proceeded to the blessing of the pita and then Mr. Xiradakis officially attributed the pieces to all the Organizations represented in the event.

Afterwards, the Dance Group of American College of Greece performed folk dances and a Buffet reception followed. The New Year’s flouri (sovereign)  for PROPELLER CLUB members Only, consisted of two nights stay at a suite at COSTA NAVARINO Hotel, in Messinia, and the lucky winner was Mr. Leonidas Kampanis. The other two flouria (sovereigns) were won by  the PROPELLER CLUB (Port of Piraeus) and by student Maria Sarantopoulou!