The contract was signed in the fourth quarter of 2013,  and executives from both companies met on February 17, 2014 in Tacoma, Washington to announce the project.

“Today marks the beginning of a long relationship between our two companies, ” said Parrott. “Our relationship will outlast this project to extend over the 35-plus year life of our vessels.” 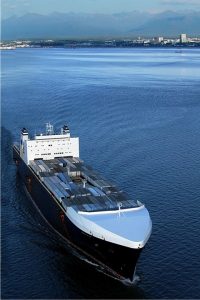 As a result of the conversion, the Totem Ocean vessels will set new standards for environmental responsibility by reducing sulphur oxide (SOx) emission by 100 per cent; particulate matter (PM) by 91 per cent; nitrogen oxide (NOx) by 90 per cent; and carbon dioxide (CO2) by 35 per cent.

“It is an unprecedentedly exciting time to be in the maritime industry. Economic constraints and the need to comply with environmental legislation have combined to accelerate the switch to LNG fuel. Wärtsilä is uniquely positioned to enable this transition since we have been a leader in developing the appropriate technology for nearly 30 years. We look forward to working with TOTE on converting the Midnight Sun and North Star to LNG so that they can realize the benefits that LNG as a marine fuel can provide, ” says Björn Rosengren, President & CEO of Wärtsilä Corporation. 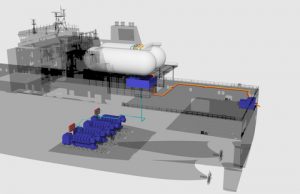 “We are seeing a transformative change in the marine industry with the switch from oil based product to natural gas, ” says Quentin Stewart, Sales Manager, Ship Power, Wärtsilä North America.

Wärtsilä is a global leader in complete lifecycle power solutions for the marine and energy markets. By emphasising technological innovation and total efficiency, Wärtsilä maximises the environmental and economic performance of the vessels and power plants of its customers.
In 2013, Wärtsilä’s net sales totalled EUR 4.7 billion with approximately 18, 700 employees. The company has operations in more than 200 locations in nearly 70 countries around the world. Wärtsilä is listed on the NASDAQ OMX Helsinki, Finland.
For more information, visit _www.wartsila.com and Wärtsilä Newsroom

Totem Ocean Trailer Express (Totem Ocean) is one the companies owned by TOTE, Inc., a subsidiary of Saltchuk Resources of Seattle, WA. The privately-owned shipping company has operated roll-on/roll-off cargo vessels between the ports of Tacoma, Washington, and Anchorage, Alaska, since 1975. For more information on Totem Ocean, please visit www.totemocean.com.