Tourism from West Bengal has successful participations at world markets 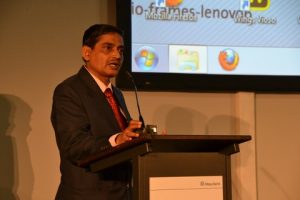 Kolkata, March 13, 2014 –  Tourism destinations from West Bengal have been very well accepted at the ITB Berlin, the Mecca of world tourism fair where tour operators from across the world congregated.

This is the first time that West Bengal participated with a separate stall at ITB Berlin from 5th March to 9th March, 2014.

Speaking on the success of the participation, Mr. Umapada Chatterjee Director Tourism said “the enthusiasm showed by foreign tour operators on the products displayed at the state pavilion marks the success and acceptance of the state’s tourism in the world market. ITB Berlin had about 60 business enquiries through B2B meetings while as many as 50 media persons from across the world visited the stall for inputs. The interest was also evident with the participation of 150 travel and tour operators, with special interest in India and Asia travel programmes, attending a tea party organised by the state tourism department.”

He also stressed on the fact that participations at ITB Asia held at International Convention & Exhibition Centre, Suntec City Singapore between October 23 to 25 2013, and London Tourism Mart between November 4th to 7th, “is bound to increase tourism footfalls in the state as the products are now well accepted in international markets.” He also said that at ITB Singapore had approximately 50 B2B and Media visits, while at London there were 112 B2B meetings with 24 media visits. In all nearly 300 B2B meetings and media interests were generated at all the three international fairs.

At ITB Berlin the well decorated stall from West Bengal focused on major tour destinations such as Sunderbans, Darjeeling and Kolkata during the Durga Puja Festival. These have drawn overwhelming response from media houses and tour operators present at the fair.

At a press conference held at the Conference Hall of ITB, Berlin on 7th March, 2014 more than 50 media houses attended. A presentation of the tourist destinations of the state was made and this created enthusiasm among the media persons present. Most of them were interested to know about the mode of travel to different parts of the state and provisions of accommodations etc. All the queries were satisfactorily answered by the Director of Tourism and other officials from West Bengal Tourism. The tour operators of the international travel marts also wanted exclusive tailor made products and tourism packages. The West Bengal Tourism Development Corpn. Ltd. and other inbound tour operators from the State who participated at the state pavilion, made very successful business transaction by selling tour packages to the international tour operators of different countries.

The media houses and the tour operators of different countries and State who attended the State Pavilion commented positively about the visibility of West Bengal Tourism in the international arena.