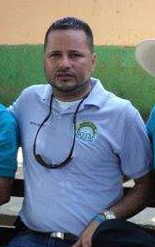 21 March 2014 – The ITF (International Transport Workers’ Federation) has won a promise from the Honduran ambassador to the UK to investigate death threats and victimisation of trade unionists in the city of Puerto Cortés.

Meanwhile members of the ITF dockers’ section committee, representing port workers worldwide, held a demonstration outside the embassy calling for ‘negotiation not intimidation’.

SGTM members have been subject to a catalogue of human and trade union rights abuses in Puerto Cortés, where global terminal operator ICTSI won the concession to run the port in September 2012. The union has been trying to negotiate with the company’s subsidiary in Honduras over a collective bargaining agreement for workers.

Victor Crespo has faced death threats and an attempt on his life, and had to leave the country for his own protection. His father was later killed in suspicious circumstances.

Meanwhile SGTM members taking part in legitimate and peaceful protests both in Honduras and at an ICTSI terminal in Portland, USA, were sought by Honduran police for arrest, in some cases detained and charged with crimes against the state.

Speaking from the steps of the embassy, Paddy Crumlin said: “We have had a productive, open and frank conversation. The ambassador has agreed that there should be an investigation into the abuses of trade union rights, and human rights being reported in Puerto Cortés. We have all agreed, all of us, that engagement from all sides is essential if we’re to bring about an end to this situation.”

*Photos of yesterday’s protest and delegation visit are available on request from dawson_sam@itf.org.uk