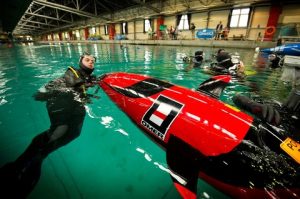 The Lloyd’s Register Foundation and the Babcock Group have come on board to support twelve teams of University engineering students from six countries on three continents who will be taking part in an exciting engineering and sporting challenge in four months’ time.

Having designed and built their submarines, the teams from Canada, Germany, The Netherlands, New Zealand, USA and UK will race them flooded, piloted and pedalled by a scuba diver, competing against the clock, around a demanding slalom course in the tank which measures 122m x 61m and is 5.5m deep (approximately the size of an international soccer pitch). The teams will be aiming to improve their times continuously over the course of the week, as they make vital adjustments to their submarines (maybe even rebuilding them), proving they can rise to demanding engineering challenges.

“The Lloyd’s Register Foundation and the Babcock Group have joined our growing number of sponsors who also include QinetiQ, the Institute of Marine Engineering, Science and Technology (IMarEST), ” says Race Director, Prof William Megill, FIMarEST. “The support of all four organisations is greatly appreciated.”

“I am delighted that Lloyd’s Register Foundation is supporting the European International Submarine Races 2014, ” says Professor Richard Clegg, Managing Director, Lloyd’s Register Foundation. “The students taking part gain valuable educational experience in engineering as well as finding out what it’s like to develop winning technology in a collaborative and competitive environment, with a focus on making sure their product is safe and reliable.”

Jeff Owen, Director Capability & Future Business Babcock International Group explains: “Babcock International Group is delighted to be supporting the European International Submarine Races.  We attended the event in 2012 and recognised that it is a great opportunity to show our commitment to developing young engineers, and an excellent way of raising the awareness of the fact that the marine industry offers tremendous technology and engineering challenges to inspire future engineers.

“The races offer a great opportunity for young engineers to demonstrate how they apply the theory of their undergraduate course into practical engineering development, in a competitive team environment.

“With our business growing internationally, we are delighted to see teams entering from across the globe, giving us an opportunity to network with future engineering talent from countries which have a Babcock International Group business.”

The eISR judging panel will be chaired by Vice Admiral Sir Robert Hill, KBE, FIMarEST and comprises experienced submarine engineers. As well as the overall award to the fastest, most manoeuvrable submarine, there will be other awards made including the week’s fastest sprint speed, agility, and the most innovative design. There is also an award for the best presentation.

Capturing the imagination of school pupils – and company guests
Schools and engineering clubs in and around the Gosport area will be invited to see parts of the races. “We want to show budding young engineers just how exciting it can be to take a concept from the paper and computer stage right through every element of building and then put it to the test under competition rules – we’d like to inspire them to consider marine engineering degrees as a result of the eISR, ” says William Megill.”We will also be inviting guests from military and civilian organisations to see for themselves the astonishing capabilities of the students.”

Further information on all aspects of the Race Week is available at www.subrace.eu

About QinetiQ
A FTSE250 company, QinetiQ uses its domain knowledge to provide technical support and know-how to customers in the global aerospace, defence and security markets. QinetiQ’s unique position enables it to be a trusted partner to government organisations, predominantly in the UK and the US, including defence departments, intelligence services and security agencies.