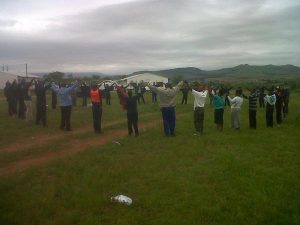 31 March 2014 – ITF affiliate the Swaziland Transport & Allied Workers’ Union (STAWU) has followed up a cost of living increase win from employers Swaziland Airlink with a double victory in its dispute with the country’s aviation authority.

At a press conference on Thursday STAWU announced that, after long months of bitter struggles, and with the help of international solidarity it has achieved its aims at the Swaziland Civil Aviation Authority (SWACAA).

According to the union, SWACAA has agreed to drop trumped up disciplinary charges it had brought against 19 union leaders and activitists. Criminal charges against five of the 19 now look likely to be dropped.

STAWU also reported that all SWACAA workers will receive a 5 per cent wage increase from this month. This comes on top of a previous 5 per cent increase the workers received in September 2013.

However, the union remains alert to the threat to the right to take legitimate trade union action posed by an application by SWACAA to classify a wide range of airport services as ‘essential services’. The authority has used the spurious justification that this is required in order to meet ICAO operational standards.

ITF civil aviation section Gabriel Mocho said: “STAWU has been going through an extended period of harassment. Despite the ongoing repression against the union, our affiliate has managed to force the government to improve conditions for workers. This is an important victory.”

Last month, an ITF mission visited Swaziland to investigate allegations of anti-trade union actions and to raise matters including the criminal charges against the 19 STAWU members with the country’s government.