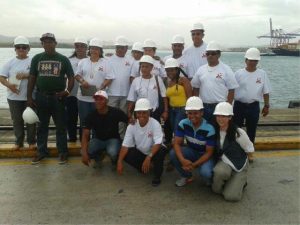 Their successes were highlighted during the Central America HIV seminar for dockers’ unions in Panama city, which took place from March 24-28. Twenty-one participants from 10 unions learned more about negotiating HIV/AIDS related clauses, and how they could use HIV/AIDS related activities to organise unorganised workers.

Lidia Amarilis Morales Garcia from SITRUEMPORNAC was one of the participants. She said: “We took part in ITF’s HIV for ports and port workers survey in 2011, and since then we’ve been doing HIV/AIDS activities with our members. The resource pack for port workers has really helped us to build our capacity, and helped us to negotiate a clause in our agreement that no worker can be discriminated against because of their HIV status. We’ll continue to work to fight HIV/AIDS stigma in the workplace, with the support of the ITF!”

Paula Hamilton, ITF dockers’ section assistant secretary, also attended the meeting. She remarked that the resource pack is a valuable tool for affiliates, particularly in organising. She congratulated those unions who have already secured HIV/AIDS clauses, and praised the three unions currently in negotiations.

Find out more about the Victor Crespo campaign on our website

Riga proudly displays its culinary culture – and its shipbuilding history