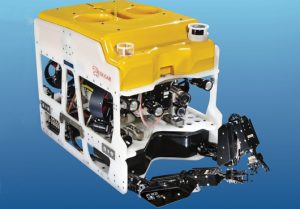 An ROV able to work at both platform and pipeline – and handle many different  projects – attracted CCC (Underwater Engineering) to the Saab Seaeye Cougar  XTi, fitted with the iCON intelligent control system.

Won over by its versatility, CCC’s ROV Manager, Tavis Letherby, says it gives
them one vehicle for both scopes of work – and one that can cope with the
different demands placed on vehicle and pilot when operating on either platforms
or pipelines.

“It is the particular blend of compact size, six powerful SMX thrusters and intelligent iCON control system that makes such versatility possible.

“Pipeline operations use a plethora of kit that makes intensive demands on the ROV, ” he explains, “whereas platform work makes greater demands on the pilot.

“During platform work the small size of the Cougar and its manoeuvrability, even in strong currents, makes it easy to fly inside and around structures.

“The pilot also needs more information during complex manoeuvres, which is provided in simple form through the intuitive iCON system, ” he says.

Tavis Letherby also believes that the diagnostic information avoids thruster down time by constantly providing data on each thruster directly to the ROV team.

In addition to incorporating the iCON control system into their Cougar, CCC has additional cameras including a Seaeye wide-angle low-light camera, Kongsberg colour zoom camera and a rear-facing camera.

A Tritech Super SeaKing sonar is also included along with a dual five-function manipulator, wheeled skid with camera  booms and cameras, and a tether management system.

The Cougar is a proven and reliable concept that is designed to undertake light work jobs, observation and survey tasks and carry a wide variety of sensors,  ancillary equipment and tooling whist working in strong currents and in tight places. Its small footprint on deck also cuts costs.

CCC (Underwater Engineering) S.A.C., established in 1976, is a leading provider of offshore construction and subsea services to the oil and gas industry in the Middle East and Indian regions.

Greece: Latest domestic developments and what lies ahead

MLE organisers to host a day of networking