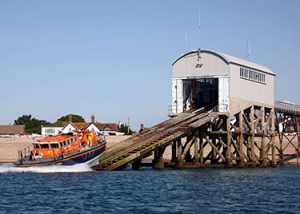 UK signalling manufacturer E2S Warning Signals has designed and developed a bespoke siren system to alert people nearby when an RNLI lifeboat is launching.

The Royal National Lifeboat Institution (RNLI) is the charity that saves lives at sea. It has 236 lifeboat stations around the coasts of the UK and Ireland. Its lifeboats are crewed by specially trained volunteers, who carry pagers. When the pager goes off, alerting them to an emergency at sea, they drop everything and rush to the station to launch the lifeboat.

The system produced by E2S has special software which produces an alarm tone combined with a voice message to alert anyone within the immediate surroundings about the launch. The siren systems have been extensively tested at a number of locations in conjunction with local communities to ensure their appropriate effectiveness. The new sirens have now been installed at a number of lifeboat stations across the country.

A two-second attention-seeking alarm tone is followed by a pre-recorded voice warning to explain what it means and it aims to warn public on the sea front and nearby boating traffic to the impending launch. The sirens will routinely only be sounded between 7am and 10pm at any location.

Neal Porter, Sales & Marketing Director of E2S, commented: “It has been great to work with the RNLI to support the charity in its lifesaving mission and to assist in promoting the safety of the crew and public during the launch of the lifeboats. Our engineering and product development teams worked closely with RNLI Operations to achieve the specific requirements set out for the signalling solution we eventually provided.”

The Royal National Lifeboat Institution is the charity that saves lives at sea. Its volunteers provide a 24-hour search and rescue service in the United Kingdom and Republic of Ireland from 236 lifeboat stations, including four along the River Thames. Additionally the RNLI has more than 1, 000 lifeguards on over 200 beaches around the UK and operates a specialist flood rescue team, which can respond anywhere across the UK and Ireland when inland flooding puts lives at risk. The RNLI relies on public donations and legacies to maintain its rescue service. Since the RNLI was founded in 1824, its lifeboat crews and lifeguards have saved at least 140, 000 lives