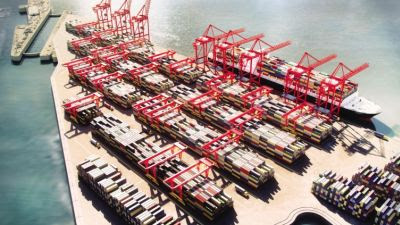 The GBP300M investment programme by Peel Ports to expand and develop the existing Port of Liverpool will see Liverpool2 become the UK’s largest transatlantic deep-sea port and container terminal. Once completed in late 2015, it will be able to accommodate most of the world’s current fleet of container vessel types and will offer shipping lines a unique opportunity to connect ships of up to 13, 500teus directly to the heart of the United Kingdom.

The new container handling equipment will be capable of handling two 380m vessels simultaneously, and ultimately will have a capacity of over 1M teu. With semi-automated remote-controlled operation, the cranes will reduce the time taken to transfer containers from port to road or rail.

They will also have the ability to operate at speeds in excess of 30mph and wind speeds of up to 55mph (88kmph).