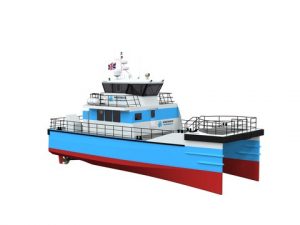 Damen is proud to announce that Windwave Workboats will be the launching customer of the Twin Axe Fast Crew Supplier (FCS) 2008.The Twin Axe FCS 2008 is a smaller version of Damen’s successful FCS 2610 which launched in 2011 and has subsequently become the industry standard for the offshore wind market, given its capability of operating further offshore in rougher weather conditions, while ensuring safe and comfortable transfers for those on board.

Based in Penzance, Cornwall, Windwave Workboats has been providing offshore wind farm support and crew transfer services to the renewable energy industry since 2008. This latest addition is the company’s first Damen vessel.

Windwave Workboats Commercial Director, Peter Scriven, comments: “In recentyears vessel designs have been pushing what can be achieved within the 24 mload line limit. We listen carefully to our clients and understand thatbigger is not always better for some of their usage scenarios but they havedemands for vessels that require greater performance than anything elsecurrently available on the market.

“The Damen FCS 2610 was a game changer when it was first introduced and kickstarted the trend for larger boats and is still the preferred large boatoption, as can be seen by their demand in the North Sea. Our clients havehad a lot of success in using them; however it is too large for some operations. In response, Damen have now developed the FCS 2008 whichmakes it the obvious choice for our applications.”

Arjen van Elk, Damen Sales Manager UK & Ireland, says: “Windwave Workboats came to Holland to take the FCS 2008 for sea trials in a rough North Sea. The experienced crew was immediately impressed by the capabilities of the vessel. We are now outfitting a vessel to Windwave Workboats’ requirements.”
The company wanted to have accommodation on board to overnight in the harbour, so two cabins with three bunks are being installed in the hulls. As well as this, the railing on the foredeck has been changed making the foredeck more spacious. A crane is also being placed on the foredeck. The FCS 2008 can also carry 2 x 10 ft containers, on the stern and bow. 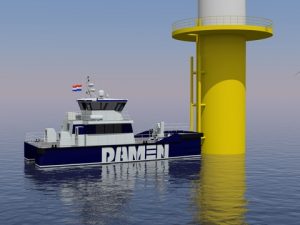 Peter Robert, Damen Business Development Manager Offshore Wind says: “The 20 m version is the perfect boat for near-shore wind farms and ideal for transferring personnel safely, as well as light cargo.
“With this move the Twin Axe offshore wind range is completed. Damen decided to row against the current in 2011 when we decided to build the bigger 26 m vessel. We saw that there was simply nothing suitable available. Meanwhile, the turbines were getting larger, wind farms were going further offshore, so developers were less interested in the smaller 14-15 m vessels. We started with the large vessels and now others have followed.

“But of course, you don’t need a 26 m vessel for every wind farm. Damen needed a smaller vessel in its offshore wind portfolio. It is important to look into the optimum spread of vessels to have the best Total Cost of Ownership for your fleet, as well as for the wind farm owner. We think this new type will be used to replace the older, smaller vessels.

“With our first customer, the market will now see her capabilities.”
The FCS 2008 will officially launch at Seawork International in June. Being built at Damen Shipyards Den Helder, three more vessels are available from stock, the first from end-April.

About the Twin Axe Fast Crew Supplier 2008
The Twin Axe FCS 2008 (20 m x 8 m) is an aluminium, high-speed vessel for transferring personnel and light cargo.It has 2 x MTU engines (1930 BHP) giving a speed of 24.5 knots. Classed by Bureau Veritas, the vessel has a capacity for 12 passengers on deck level and spacious accommodation.

12 passenger seats, a galley and two toilets are on deck level, together with ample storage space. There is internal access from the deck level to the wheelhouse, which has a helmsman’s seat, navigation seat and chart table. The two hulls accommodate engine rooms, storage and optional cabins.

General characteristics
The Damen FCS 2610 is a catamaran workboat based on the Sea Axe technology. This vessel has been developed to make transfer of personnel to offshore platforms or wind turbines safer and more comfortable. Besides, the Twin Axe hull form also stretches the operability of the vessel way beyond the limits of the more conventional competition.

The FCS 2610 has a speed of approx. 26 knots and a range of approx. 1, 200 nm, depending on the sea state. The very slender Twin Axe hulls guarantee unparalleled seakeeping behaviour and – as a bonus – have very low resistance, resulting in great fuel economy.

The 26m long and 10m wide vessel is standard equipped to perform crew transfers onto turbines in offshore wind farms, but can be further fitted with options to expand the operation capabilities of the vessel. To name two: the vessel can be equipped with a 20tm crane and a rescue/dive platform. Twin Axe vessels are built in series under Bureau Veritas Class and can be customised to the requirements of various National Authorities.

The FCS 2610 has a spacious deckhouse to accommodate a crew of four and up to 12 passengers. The position of the deckhouse is aft, as this is the most comfortable position on board of a ship – and it creates a huge foredeck.

History
The Damen Fast Crew Supplier 2610 ‘Twin Axe’ was developed with Delft University of Technology in 2009-2010 and is based on the highly successful Sea Axe (or Axe-bow) technology, which also originates from Delft University. Since 2006, Damen has delivered more than 100 (monohull) Sea Axes, mostly to offshore oil & gas related operators. The first Twin Axe was delivered in June 2011. Before the end of 2013, more than 25 were sold, making this vessel basically “The Industry Standard” for the offshore wind market.

Series-built, on stock
To be able to offer short delivery times, the FCS 2610 is built in series on stock, e.g. at the specialized aluminium production yard Damen Shipyards Singapore. This company already has built a large series of these vessels in the past three years and can deliver very fast.

New development – the FCS 2008
Due to (commercial and technical) developments in Offshore Wind Farms, customer feedback and new demands from new clients, Damen has developed the FCS 2008, a smaller version of the FCS 2610. Several FCS 2008 are currently under construction.

A short video of the FCS 2610 can be viewed here: https://www.youtube.com/watch?v=KpJ4rznbyNo