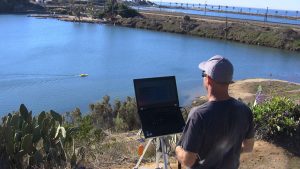 A number of new developments have entered the market designed to make the inspection of dams and hydro plants more efficient.

In the past, inspecting hydroelectric dams could be a difficult and expensive operation. Water flow at the dam had to be shut down or slowed significantly to allow access by divers. The diver was often working in a dark overhead environment and had to contend with piles of debris around the dam structure, making it a particularly hazardous job. For many companies, ROVs have become a popular choice for these inspections whenever possible.

Ontario Power in Toronto, Canada, for example routinely inspects its dams and adjacent structures using an ROV. It has used a SeaLion ROV from JW Fishers for inspection operations at several of its hydro plants. Spokesman Mike Ostroski says: “In our Smokey Falls plant in northern Ontario the SeaLion inspected tailrace concrete piers, went up the draft tube to the underside of the runners, inspected the headworks concrete, and checked for erosion under the sluiceway aprons. At our Sir Adam Beck plant we inspected the headworks concrete piers, the headgate, and it’s gains on one of the units. We’ve found the ROV to be an effective tool for this work and it has quickly paid for itself. One advantage of the ROV is that we don’t have to shut down the units on either side of the one being inspected, letting us maintain a higher operating capacity. Also, we can put it in on the downstream side of the trash racks and it’s perfectly safe.”

Another Canadian dam inspected with an ROV is the Centrale Shipshaw Dam in northern Quebec. Fishers SeaOtter ROV performed an inspection of the intake chambers and trash rakes. The ROV was deployed from a small boat at the dam face and submerged to 290ft. The ROV was able to operate around the dangerous currents near the intakes and successfully perform an the inspection of all chambers. The majority of the chambers were found to free of debris, however, several were clogged with logs, drums, and other materials. Video tapes of the inspection along with a written report were submitted to the unit’s managers.

In Caracas, Venezuela marine services company Trime C.A. used a SeaLion to find a leak in the face of a dam. The ROV surveyed the 305m long face to a depth of 50m. According to company spokesman Betram Bruhl, the SeaLion successfully located the leak which minimized the amount of time divers had to spend in the water, reducing the overall cost of the job. At the Ice Harbor Dam in Pasco, Washington, a group connected with the US Army Corps of Engineers are using a SeaLion ROV for a variety of inspection projects and to monitor fish populations affected by the structure.

Another company that offers ROV’s which can be used at hydroelectric and dam projects is Deep Trekker. The company recently introduced a new addition to its Micro ROV line. The DTG2 underwater micro Remotely Operated Vehicle (ROV) with auxiliary lighting and laser scaling system was showcased at the recent Underwater Intervention conference in New Orleans, US. The new lighting system allows for both static and tracking lights on the ROV, with a total of 1300 lumens.

“We offer a compact, portable and easy to use ROV at an affordable price, ” comments Deep Trekker President, Sam Macdonald. “But quality was never compromised; this little machine is a tough, robust workhorse suited for harsh environments. The DTG2 is manufactured from cast aluminum, and built to last.”

The portability and ease of use make this ROV suitable for commercial marine professionals. With long lasting onboard batteries, the DTG2 is fully self-contained, with no need for external power, topside box, or other installations. Deploying in less than 30 seconds, the Deep Trekker DTG2 can easily be used at any job site and on any vessel, says the company.

Another ROV available on the market is the Seaeye Sabertooth, which is a merger of the Double Eagle SAROV (Saab Autonomous Remotely Operated Vehicles) and Saab Seaeye technologies, resulting in a hovering hybrid AUV/ROV with deep water capability, long excursion range and a six degrees of freedom control system.

Seaeye Sabertooth is available in a single hull and a double hull version. This makes it a very powerful but lightweight platform for both inspection and light IRM tasks, it is claimed.

This deep water hovering hybrid AUV/ROV benefits from 360° manoeuvrability with six degrees of freedom, interfaces for sensors/auxiliary equipment and an extremely long excursion range. It is powered by long-range batteries which can be recharged at a subsea docking node, which also allows data exchange.

The Seaeye Sabertooth can be operated in three different modes: autonomous, operator-assisted and manually. It can carry out programmed autonomous inspection, maintenance and repair tasks. Once on the work site, intervention and tooling control is assisted and monitored by the operator through low bandwidth communication.

An important part of any water project is to consider effects on the aquatic habitat. BioSonics, Inc and The Oceanscience Group recently announced the release of a portable remotely-operated habitat-mapping survey boat, the Z-Boat 1800MX. A combination of Oceanscience’s proven remote hydrographic survey boat and BioSonics’ MX echosounder, the Z-Boat 1800MX allows researchers to obtain quantitative measurements of aquatic vegetation and substrate distribution without the expense and effort of launching a manned boat.

With real-time control of all echosounder settings through the Ethernet network radio connection, data quality is not compromised with the switch to the remote platform.

“These remote platforms can provide our customers habitat data where previously it was costly or impossible to collect”, according to BioSonics’ spokesman Eric Munday of SUBSEA 20/20. “For hard-to-access shallow water surveys, the MX echosounder may be installed on the Z-Boat in just a few minutes, and then easily removed for use on a manned boat as required, so this is another tool to maximize the value of our instruments to our customers.”

Munday contacted Oceanscience with the idea for a remotely-operated platform for the MX echosounder. For BioSonics the integration was simple: “We were expecting to have to repackage the sonar for the Z-Boat but as it turned out the existing case fit in the boat’s instrument compartment. So we did not have to change anything at all!”

With the MX integration complete, the two companies look forward to field demonstrations of the system in action, as well as more remote instrument projects.

Compact and portable ROVs from VideoRay

ROVs from VideoRay have often proved a popular choice for hydroelectric inspections. The compact and portable system can easily be deployed and piloted by a single operator while capturing high resolution color video for your documentation needs.

The PRO4 HY 300BASE Hydroelectric ROV System has been specifically configured for Engineers and Service Managers to quickly and effectively perform a variety of basic underwater infrastructure inspection tasks. Getting into tight spaces or intakes is no problem says the company as the maximum diameter of the VideoRay is no more than 12 inches (25.4cm). With the PRO4 HY 300R, the standard computer from the BASE Hydro system is replaced with a rugged Toughbook computer and adds an industrial hand controller.

The need for operator training

As the demand for ROV use grows, there is a need for trained ROV operators. The Underwater Centre, based in Fort William, Scotland, and Tasmania, Australia, has developed ROV courses working closely with the ROV industry, to give graduates real-life experience of working with ROVs.

“As the demand for ROV use grows, there is a need for trained ROV operators”

Trainees fly inspection-class ROVs in an open-water environment, working alongside commercial air and saturation divers, as they would once out in the industry. This first-hand knowledge and familiarity with ROV operations increases the competence levels that they bring to the job.

In addition, the theoretical elements of the course covers a range of ROV systems, providing graduates with knowledge and experience to maintain and repair ROVs.