Strong month-end for the Oslo market

After an unusually strong surge at the end of the month, with four all-time highs in a row and high trading volumes, the Oslo Børs Benchmark Index closed April up by 2.9% for the month.

The average daily value of share trading (number of transactions and NOK billion): 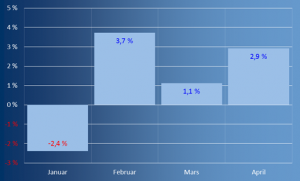