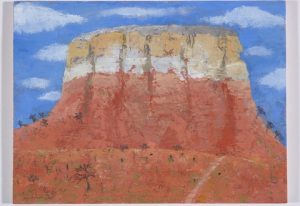 Moving On: Caroline McAdam Clark’s compelling paintings inspired by her road trip through Arizona and New Mexico,  By James Brewer

Welcome to New Mexico, said the road sign as Caroline McAdam Clark – an artist based in London and Suffolk – and a Los Angeles friend motored in a shiny red Nissan  hire car across the high-desert plain dominated by the dramatic peak of Shiprock.

As they had done three years earlier, in 2013 the two women had driven across Arizona, this time “pausing here and there for me to review and burnish memories captured earlier, ” says Caroline, and this time they pressed on across the Colorado plateau, into the vast neighbouring state with itsHispanic and Native-American heritage. The earlier trip had led the artist, a member of the Royal Watercolour Society, to produce a body of work shown in 2012 in her On the Road exhibition at the Thackeray Gallery in Kensington, London. 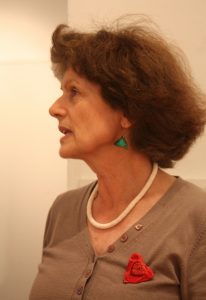 Thirty-two of her works inspired by her latest ambitious journey are in Caroline’s new exhibition at the Thackeray Gallery, until May 23 2014. They are the result of the impact of the magnificent landscapes on this artist who is immensely gifted in choice and technique of media.

She chose the title Moving On for the show, as it flows directly from her earlier exhibition, and because “sometimes to reach out into new territory—both literally and imaginatively—can only be done for me, in travel.”

Her imagination ‘moves on’ – runs free – while yoked to the magic and myth of the vast American region. The adventure certainly fed her creative spirit: “My first visit into this country was undertaken in a spirit of childlike excitement and wonder; this second visit whilst having at its core a similar eagerness to experience new territories and sensations, felt richer, more informed, giving me a more layered response I think, to the landscape, and its inhabitants both past and present.”

Caroline and her companion based themselves in Santa Fe and at Ghost Ranch, near the small settlement of Abiquiú. Lodging at Ghost Ranch, an education and retreat centre, they took in the extraordinary geological scenery, “in an amphitheatre of red and white rock, juniper and sage-bush and desert.”  This was where the reclusive Georgia O’Keeffe (1887-1986), one of the most significant artists of the 20th century, spent many years, indulging her love affair with New Mexico. O’Keeffe was devoted to creating imagery that expressed what she called “the wideness and wonder of the world as I live in it.” One picture shows the bold outcrop of Cerro Pedernal, in a view from what was Georgia O’Keefe’s studio.

The arid stretch was once wetlands patrolled by dinosaurs; in the modern era Navajos and other tribes claimed the land as theirs as did subsequently the Spaniards – and then others ranging from cattle rustlers to wranglers (cowboys). The ranch earned its name when cattle thieves attempted to hide their misdeeds by spreading the story that the land was haunted.

It is easy to understand Caroline McAdam Clark’s fascination with the work of Georgia O’Keeffe, which includes the depiction of rocks and other natural forms of northern New Mexico, in figurative and abstract interpretations. Coming from the other side of the Atlantic, Caroline treats sometimes similar subject matter in her vivid and telling style: bears and coyotes, circles within circles, and seed shaped objects recur. 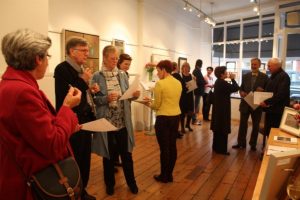 From Ghost Ranch, the intrepid ladies travelled to Taos, a community near the Rio Grande gorge, and across to the Mesa Verde, returning to Los Angeles past Shiprock and Winslow, taking in sections of the famed Route 66 (noted in her oil and pencil work Found Objects). A museum in the city of Holbrook, in Navajo County, moved her to another composition in oil and pencil Cabinet of Curiosities, a four-by-four squares patchwork of symbols evoking various eras in the region – one of the images being a blue Dodge pickup truck from the 1950s trundling across a vast stretch of desert. In Ghosts in the Desert, three fish-like objects float eerily across the sky. 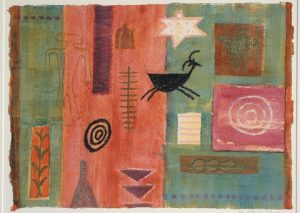 As the adventurers had signed their hire car agreement, the clerk had asked: “Where you goin’ ladies?’ When they rattled off their 3, 500 mile planned itinerary, he nodded, a faraway look in his eyes, and asked “…you ladies, British?”

Alongside her painting, Caroline has worked as book illustrator, printmaker and muralist, has written for art publications and taught history of art. She has co-authored a book with husband Piers Feetham on the History and Art of the Frame. Her fascination with matters maritime led her to produce a series of paintings inspired by the BBC Radio Shipping Forecast, and she has an ongoing project making video portraits of senior women British painters. 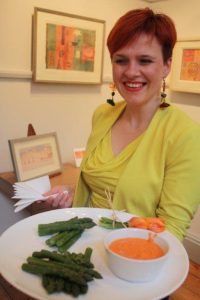 Živile (from Lithuania) serves refreshments at the preview evening.

Of the aftermath of her American odyssey, Caroline said: “This is still unfinished business. I will, if only through my sketchbooks which are still packed with unexplored ideas, unresolved compositions, and unsung poems that will haunt me till I draw them out, continue this exploration.”

Moving On, works by Caroline McAdam Clark, is at the Thackeray Gallery, 18 Thackeray Street, London W8, until May 23 2014. www.thackeraygallery.com