Naming Ceremony for EVER LISSOME 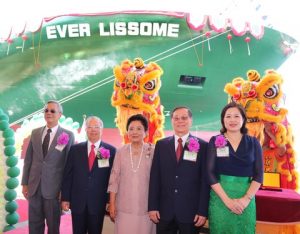 May 13, 2014 – Evergreen Group today held the naming ceremony for EVER LISSOME, the fifth of its L-type vessels to be built by CSBC Corporation in Taiwan. The ceremony took place at CSBC’s Kaohsiung shipyard and was officiated by Mr. Raymond Lin,  Evergreen Group’s Vice Group Chairman. The official rope-cutting of the new 8, 508 TEU vessel was performed by Mrs. Aphinya Changariyavong, the wife of Evergreen Shipping Agency (Thailand) Chairman Mr. Nivat Changariyavong.

“Global economic outlook is gradually improving. According to IMF’s latest World Economic Outlook, the world output is expected to grow by 3.6% in 2014. In addition,  Clarksons expects global box trade to increase by 6% this year.  In view of this growth momentum, Evergreen Line has been conducting a fleet renewal program not only to better serve the expected trade recovery, but also to safeguard the marine environment with eco-friendly ships.” said Mr. Lin in his speech at the ceremony.

Owned by Evergreen Marine (UK) Ltd.,  EVER LISSOME is 334.8 meters in length, 45.8 meters wide, with 948 reefer plugs. The L-class containership is fitted with alternative marine power, ballast water treatment system, electronic-controlled fuel-injection engine that supports slow steaming and many more eco-friendly designs. After her delivery on 15th May, the newbuilding will join Evergreen Line’s Asia – US East Coast (via Suez Canal) route, replacing an older vessel.

LISW has new captain at the helm for 2015 event