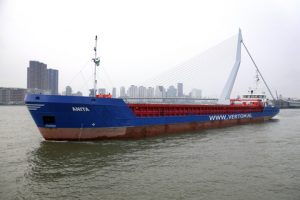 The Damen shipbuilders in the Dutch province of Friesland will not just be sitting on their laurels after the delivery and christening of the two Damen Combi Freighters 3850 (the Noordvliet and Zuidvliet) and the Damen Combi Coaster 2500 MV Anita. “We are seeing a real market for smaller vessels and an interest in the vessels we build.” The specialised yard, part of Damen Shipyards Group, is ready for a market revival.

This was what Remko Bouma of Damen Shipyards Bergum had to say about the developments in the maritime industry, in which Damen Shipyards plays a prominent role. This is because the Damen Group’s shipyards have plenty to offer. The branch in Bergum contributes by building vessels in the 8200, 2500 and 3850 series, as well as other products in its portfolio. The Combi Freighters 3850 Noordvliet and Zuidvliet have already been deployed in regular service from the Baltic States to the Black Sea, where their sister ships previously supplied by Damen have already proven themselves. The Combi Freighters 3850 generally transport project-specific, bulk and non-bulk cargoes. The Noordvliet and Zuidvliet showed what they could do on their maiden voyages, during which they transported parts and equipment for wind farms from Germany to the Mediterranean region. Both ships had cargo on both of their two cargo decks.

MV Anita
Erik Schultz, the Commercial Director at Damen Shipyards Bergum, seconded his colleague Bouma’s positive interpretation of the market, including while serving as master of ceremonies during the christening of the Damen Combi Coaster 2500 MV Anita. This sea/river vessel has been chartered by Vertom USC Holding, a Rotterdam-based tramp shipping agency. Among other things, MV Anita can transport 54 TEU or a total of 2, 500 tonnes of dry bulk goods, steel, or other types of cargo. The sea/river vessel runs routes between the United Kingdom and ports in continental Europe. Through environmentally friendly features, in particular by flexibly deploying its main engine (which saves fuel) but other “eco” measures as well, the vessel can be operated much more fuel efficiently than its predecessors in the same class.

This vessel and “marine freight superbroker” (and former chair of the Dutch Marine Freight Brokers Association [Nederlandse Zeebevrachters Sociëteit]) Ary Vijfvinkel have something in common: MV Anita was named for Vijfvinkel’s wife, Anita Vijfvinkel-Pevenage. Damen Shipyards and Vertom UCS Holding found this gesture to be a proper way to honour the man who for many years was the face of international marine freight brokerage. His wife Anita was proud to be able to assist with the christening of the MV.