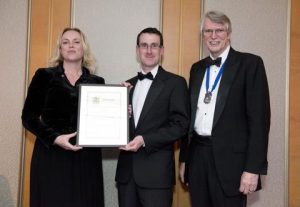 AkzoNobel’s Marine Coatings business, International®, is celebrating the success of its Intersleek®1100SR technology following a series of nominations and award wins from RINA, Seatrade and Riviera Maritime.

Intersleek®1100SR, the shipping industry’s first biocide-free foul release fluoropolymer technology that addresses the significant issue of slime fouling on ship hulls, was recently awarded the 2013 RINA – QinetiQ Maritime Innovation Award at the Institution’s Annual Dinner. This was the first occasion this Award has been presented and Intersleek®1100SR was chosen from 17 entries worldwide.

The Royal Institution of Naval Architects and QinetiQ’s new award acknowledges outstanding scientific or technological research in the areas of hydrodynamics, propulsion, structures and materials. The award recognises innovations that offer the potential to make significant improvements in the design, construction and operation of marine vessels and structures. 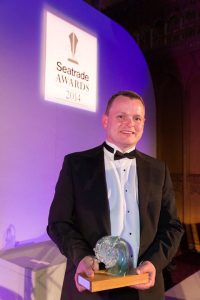 Intersleek®1100SR delivers macro and micro fouling control with improved static resistance, even in warm waters and is suitable for slow steaming. The movement of the ship through water can release slime that builds up during static periods. As a result, vessels can achieve reduced drag, improved fuel efficiency and reduced CO2 emissions.

Trevor Solomon, Intersleek Business Manager, said: “At today’s bunker prices, the effects of slime potentially costs the shipping industry 44 million extra tonnes of bunker fuel, $28.6 billion in additional fuel costs and an extra 134 million tonnes of CO2 emissions every year*. It is a key issue that impacts every ship owner and operator.

“The development of Intersleek®1100SR is therefore a significant milestone for us and we are very pleased that this has been recognised by the industry. Building upon earlier generations of the technology, the tailored surface chemistry of the latest product specifically influences and resists the adhesion and settlement of organisms that make up slime colonisation.”

The introduction of Intersleek®1100SR continues the company’s long history of fouling release development. In 1996, it launched the first and original silicone based Intersleek®425 for fast craft. In 1999, Intersleek®700 silicone technology was introduced to bring foul release to deep-sea scheduled vessels. In 2007, the introduction of Intersleek®900, the original biocide-free foul release product based on fluoropolymer technology, meant that foul release was available for all vessels above 10 knots. Intersleek®1100SR, the newest addition to the range, has become the first ever fluoropolymer slime release coating for all vessels.

With over 1, 700 individual applications, Intersleek® has the largest foul release track record within the industry.

AkzoNobel is a leading global paints and coatings company and a major producer of specialty chemicals. We supply industries and consumers worldwide with innovative products and are passionate about developing sustainable answers for our customers. Our portfolio includes well-known brands such as Dulux, Sikkens, International and Eka. Headquartered in Amsterdam, the Netherlands, we are consistently ranked as one of the leaders in the area of sustainability. With operations in more than 80 countries, our 50, 000 people around the world are committed to delivering leading products and technologies to meet the growing demands of our fast-changing world.