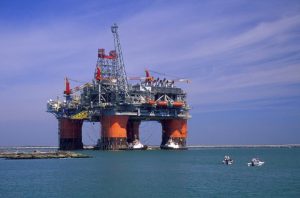 The “Green” threat to oil rig security – emerging as an issue as alarming as pirac By Amanda Roberts, Jeanius Consulting

Last week an oil rig in the Barents Sea hit the headlines after being successfully boarded, stopping drilling for 89 hours at an estimated cost of $1.26million. So who were the boarders; gun toting pirates threating violence and looking to steal?  No, this was a “peaceful” protest executed by Greenpeace which saw 15 activists from 8 countries scale and occupy a rig to protest against drilling plans near to the Bear Island Nature Reserve.

This is the second time Greenpeace have staged an oil rig protest within the past 12 months, with 30 activists last year facing piracy charges from the Russian government, later changed to hooliganism charges.  This begs the question, should activists be deterred in the same way as pirates?

There lies the first issue of many – “peaceful” protesting.  As an industry we have grown used to violence from boarders, the 2700 seafarers attacked by pirates last year alone testament to this. Deterrents have therefore often been put in place on this basis, fighting violence with violence (or at least the threat of) with the use of armed guards. The use of which is the subject of much controversy when trying to deter pirates – ongoing costs, political connotations, fear of escalation of the use force, the list continues. However, for political activists who protest peacefully and pose no physical threat to crew, surely this isn’t even a viable option morally?

Razor wire had previously been the most widely used piracy deterrent, however, by its very nature, the risk of injury and infection continues to be an issue for crew. Protestors trying to board of course take physical risks in boarding, yet the negative PR should a protestor get injured by wire or spikes would soon outgrow the issue of any wrongdoing by the protestor being there in the first place.

So what is the alternative? Clearly a passive solution to deter activists boarding is what’s needed. After all if they cannot get onboard the rig in the first place this ensures its business as usual and costly delays, possible injury and negative PR are all avoided. 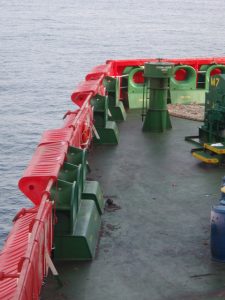 GUARDIAN on a starboard rail

Guardian Maritime Limited have the solution – GUARDIAN™  anti-piracy barriers and not only have they the only 100% undefeated deterrent against piracy and unwanted boarders, they have it already proven to work on rigs following the defeat of Greenpeace protestors in New Zealand last year.

On the 19th November 2013, Greenpeace activists arrived at the Noble Bob Douglas Drill ship intending to board. The visible presence of GUARDIAN meant that despite having specialist climbing equipment with them, the activists did not even attempt to board, realising they would be unsuccessful. Instead, they resorted to circling the ship inside the safety zone.

Teresa Stevens, owner and designer of GUARDIAN says “ The threat of piracy is still very real, with 72 incidents reported this year already, however  the increase in the number of oil rig protests is an issue that needs addressing, a passive solution is the only way forward. GUARDIAN is ideal – a visible deterrent, BMP 4 compliant installation, environmentally friendly, recyclable and saves operating costs by lasting up to five years. The units can also be swapped between rigs making it a cost effective investment too.”

GUARDIAN is also being successfully used to protect over 200 vessels, in some of the world’s biggest fleets, including Maersk, CMA-CGM and BW Tankers.

Oil will continue to be drilled, and activists will continue to protest against it – this is an issue that shows no sign of disappearing.  Environmental activists feel so strongly for the cause they are willing to endangering their life by climbing oil rigs in treacherous conditions, and risk their freedom by incarceration. Clearly this needs to be taken as seriously as piracy and the solution to the issue is to prevent boarding in the first place by both a visual deterrent and a proven system.