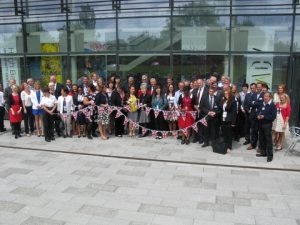 It is time to stand up and shout about the enormous benefits that the shipping industry brings to the UK and to international trade, panelists declared in the course of a debate at the WISTA-UK Liverpool Forum, a day-long event during the International Festival for Business on Merseyside.

Speakers insisted that executives and supporters of the industry must inject more passion into their arguments for clearer recognition of the benefits of ocean transport, for fairer reporting of casualties and other maritime issues, for improved welfare for seafarers, and for a more intense drive to recruit new talent – it is forecast that by 2020 the UK will be 5, 000 seafarers short.

The Liverpool session on June 16 2014 was a follow-up to the WISTA-UK Grand Annual Debate in London the previous month, which voted clearly in favour of a motion lamenting that the shipping industry was “invisible.” WISTA-UK is a leading national entity of the Women’s International Shipping & Trading Association.

An expert panel at the Liverpool event was asked to determine the best way to ensure that the industry “becomes more visible.”

Ewen Macdonald, director of Sea Vision UK, was clear: “The necessary commitment and passion has been lacking, ” he said. “We are one of the world’s best kept secrets. Our companies operate ‘behind fences’ for security and for health and safety reasons. Their contribution is not just unknown by young people, it is not acknowledged by their parents or teachers.

“Our industry used to be ‘people rich’. You would see people coming out of dockyards, from ships and from manufacturing and they went back into the community and spread the word. We do not have that now. ‘The docks’ tends to be upper class and yuppie. We, the sector, are our own worst enemies. We have a great story to tell, it is about time we got our backside into gear and told it.”

Capt Jessica Tyson, a marine consultant surveyor with CF Spencer & Co, Bristol, said that the only time the merchant navy or marine industry was visible to the general public was “for the wrong reasons.” She censured the mainstream press for its reporting: “The Costa Concordia [cruise ship casualty] was a media dream. But 3, 500 people were got off the ship safely, and less than 1% of those who had been on board died. No accident ever happens for one reason, it is an accumulation of errors, ” said Capt Tyson.

She insisted: “It is about time we started talking, and challenging totally incorrect facts about the industry.”

Capt Kuba Szymanski, secretary-general of the ship management trade association Intermanager, said: “I was of the opinion that we were very visible, but for all the wrong reasons. I think we have a problem with ourselves in this particular industry. We love blaming people. As long as we do that, we do not make life very easy.”

He compared the image of shipping with that of aviation. “Last year we lost less than 100 of the world’s huge fleet of merchant ships. How many commercial airplanes went down in 2013? – more than 300, out of a much smaller fleet.”

Capt Szymanski criticised the industry for being conservative in its approach to social media, but praised “very positive” initiatives such as Blue Denmark and concerted efforts in Cyprus to promote the maritime industry of their respective countries.

The public had to be told of the contribution made by the maritime industry despite the problems it faced, including piracy. Only now had 11 seafarers held as hostage for three and a half years been released.

Bridget Hogan, director of publishing and marketing at the Nautical Institute, said it was not by accident that the industry gets the treatment it does. “The industry is not just behind port gates, it’s behind closed doors. It has to join the 21st century and realise its responsibilities. In a lot of people that responsibility is there.

“People are not interested in pictures of containerships from the 60s and 70s, ” said Ms Hogan. “Let’s get some passion into things, hear less about the past, and lobby our MPs. We all meet people from different walks of life: we have to think about the debate that is going to move people. We can change from within, open ourselves more and be proud to do so.”

Ms Hogan, who is secretary of WISTA-UK, urged people in shipping to inject more passion into their arguments over such matters as the misdeclaration of shipping containers, a transgression which has resulted in several high-profile casualties at sea. “It is about people’s lives, ” she said of that topic. “It is not our fault, it is the fault of the shippers who do not see the consequences and regard it as a victimless crime.”

Ms Hogan added: “The people who hold the purse strings are not unhappy that the industry is invisible.” The approach to getting the truth out about the contribution of shipping to society “has to become more sophisticated, people have to get out of their burrow.”

One member of the audience, Commodore Barry Bryant, director-general of Seafarers UK, said: “I think at the board of director level there is huge passion, but it is for the bottom line. How do you convince those at the top end of the industry to look after the seafarers?”

Session moderator Ian Millen, chief operating officer of Dryad Maritime Projects, and chairman of the Maritime Security Working Group, rounded off the debate on an optimistic note that sections of the public and decision-makers could be won over. He said: “If you give people a chance, they love the idea of ships.

Women’s International Shipping & Trading Association (WISTA) is an international organisation for women in management positions involved in the maritime transportation business and related trades worldwide. It is a major player in attracting more women to the industry and in supporting women in management positions. With networking, education and mentoring in focus, WISTA seeks to enhance members’ competence and empower career success.  WISTA-UK is the oldest of all National Associations and was founded in 1974.

WISTA is growing and currently counts over 1.800 individual members in 34 national WISTA Associations.

At the annual conference, WISTA will choose its international Personality of the Year, based on the criteria of furthering the WISTA values of Professional, Dynamic, Open-Minded and Committed.

Each national WISTA association is entitled to submit the name of one person, male or female, for the award. Previous winners in the UK who were also elected as International WISTA Personalities are Katharina Stanzel, managing director of INTERTANKO (2012) and Suzanne Williams, Hostage Negotiator (2010).