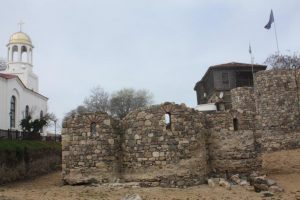 Church of Sts Kiril and Metodii (Cyril and Methodius) to the left; foreground ruins of St Nicholas church.

Christian pilgrims revere human bones kept in a Black Sea church that are said to be from the body of John the Baptist,  By James Brewer

One of the greatest recent finds in the history of Christianity – of relics believed by many of the faithful to be fragments of the bones of John the Baptist – is celebrated in Sozopol, an ancient town on the Bulgarian Black Sea coast half an hour’s drive from the port of Burgas.

Sozopol is a lively summer holiday resort favoured by tourists from all over Europe, including thousands who visit for religious and cultural reasons.

Since 2010, the town has had an extra claim to fame, as custodian of bones discovered that year in the ruins of St John the Precursor Monastery on the southern coast of neighbouring St Ivan Island, the largest Bulgarian island in the Black Sea. The monastery was used between the 4th and 17th centuries.

John the Baptist is often referred to as the Precursor or forerunner of Jesus, as he predicted the coming of the Messiah, and baptised Jesus.

Scientific tests indicated that the remains were all from one man, aged about 40, of Middle Eastern origin, and in 2012 DNA and radio carbon tests showed that the bones matched a theory that they were those of the uncompromising preacher who died a martyr.

While precise years of the origin of the fragments could not be determined, the period was narrowed down to between 5AD and 75AD. John is believed to have been executed – Herod Antipas, ruler of Galilee, ordered that his head be cut off and presented on a silver plate after being swayed by the dancing of Salome, the daughter of his illegal wife – in around 30AD.

Radio carbon dating was employed in 2010 to try to reconstruct the genetic profile of the man. Investigators cannot be certain that it was John the Baptist, but they say that it could be, endowing the find with high significance for the Church.

The archaeological excavation was a resoundingly successful project of the Sozopol Foundation, a privately-run venture that vigorously promotes Bulgaria’s historic patrimony.

For the dig on the island of St Ivan (the Slavic name for St John), the Foundation secured the financial support of the government of Norway to the tune of almost Euro500, 000, under the financial mechanism of the European Economic Area.

Discovery of the relics was of world importance, says the Foundation president, Kiril Arnautski.

The remains, found in a marble reliquary, include a knucklebone from the right hand, a tooth, part of a cranium, a rib, and an ulna, or forearm bone, all from the right side of the body. A second, smaller stone box was found nearby, empty. The marble is thought to be from one of the islands in the Aegean Sea, and the volcanic stone of a type found in southern Turkey.

It is thought the remains were carried in the small box to the island of St Ivan where they were transferred to the larger container. Someone must have buried them a few hundred years after the death of John, well before the brisk European trade in relics got underway in medieval times.

The monastery on the island may have been built over an ancient Greek temple to Apollo (Sozopol was for half a millennium a Greek city-state called Apollonia Magna), making use of marble and limestone slabs from the earlier building. Nearby on the island, there had been an ancient Thracian sanctuary, known for its supposed healing powers.

In a more modern role for the island, French engineers constructed a sonar lighthouse in 1884 to direct ships, as did a lighthouse on Cape Emine, to Burgas Bay.

Pilgrims from many countries make their way to the Cathedral of St Cyril and St Methodius, a fine white structure that bids welcome to Old Sozopol, to venerate the precious fragment collection. The 1888 church, designed by the architect Gencho, has a fine wood-carved iconostasis of the Orthodox Church of St John the Evangelist which was destroyed in the 1960s.

A short distance away in Sozopol, the Church of St George, is filled with valuable icons, and claims a relic of the cross and another of St John the Baptist.

At least seven other countries claim to have relics of John the Baptist. Among them, Amiens Cathedral has what may be part of his skull, brought back from Constantinople in the early 13th century by a Crusader who said he had found it on a plate with a verifying Greek inscription – although he said he sold the plate to pay for his voyage back to France.

Christianity took hold in Sozopol in the 5th century and bishops were resident there from at least 431. In the town there are four churches and 22 chapels, many of the latter built low to the ground, because the Ottomans permitted Christian temples to be no higher than an average soldier mounted on horseback.

Excavation is still in progress of the ruined Church of St Nicholas the Wonder Worker and has already turned up gold leaves, swords, and under the altar, from the 15thcentury possibly a manna container for holy oil collected annually from relics of St Nicholas in Bari, Italy. The church was built in the 6th century, later destroyed, and reconstructed in the 11thcentury.

Behind St Nicholas Church was found in 2012 the grave of a man, stabbed through the chest, in a ritual practised 700 years ago to stop him turning into a vampire, and the skeleton of a woman who may have been his wife. A spike was driven through people branded as evil to ensure they would not rise from their graves.

The grisly find led to a tourism co-operation agreement between Sozopol and the Romanian town of Sighisoara, the birthplace of the better known ‘vampire’ Vlad the Impaler.

Native sons of Sozopol include Patriarch John XII of Constantinople (in office 1294–1303). He threatened to reign in 1299 in protest against the marriage of the five year old daughter of Byzantine Emperor Andronicus Palaiologos to the middle-aged and dissolute King of Serbia. John was persuaded to stay, and continued to champion the poor against government oppression – but it all proved too much for Andronicus who removed him in 1303. Andronicus was a man of wrong decisions: he made the blunder of dismantling his fleet, leaving him poorly armed for his wars with Venice.

Going beyond the minimum”