Maritime art from the Black Sea coast of Bulgaria…

Maritime art from the Black Sea coast of Bulgaria radiates its strength in Sozopol Foundation Museum,  By James Brewer

An honourable tradition of recording pictorially the mellow daily life and the bursts of commercial activity in towns and cities by the sea endures in historic Sozopol, a Bulgarian town perched on a peninsula jutting into the Black Sea.

Moving examples of this type of work are to be seen in the museum section of the complex known as “Southern Fortress Wall and Tower, ” a restored feature of the architectural-historic reserve of the ancient settlement.

The museum, maintained lovingly by the privately-run Sozopol Foundation, features several recent oil paintings by Angelina Dobreva Nedin, showing her empathy with the turbulent sea, the hard life of seafarers and the labours of the townsfolk.

Angelina, who graduated from the Nikolay Pavlov National Academy of Arts in Sofia in 1998, lives and works in Sozopol. 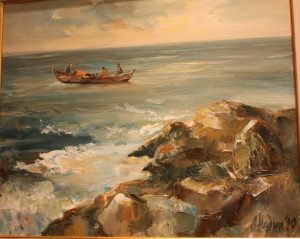 Her quick brushstrokes capture the loneliness of fishermen setting out in a rough sea, the irregular rocks they must navigate, their boats safely ashore after a voyage, and their womenfolk absorbed in their handwork as they sit outside their 19th century Revival houses.

Angelina brings an admirably clear 21st century perspective to the displays in the museum that contains material from three millennia. Despite recognising the hard life of the community she portrays, she keeps her imagery calm and consistent.

Perhaps the best known painter who was a native of Sozopol was Giorgios (Yorgos) Gounaropoulos (1889–1977), also known as G. Gounaro. Sozopol has an intimate link with Greek civilisation: Hellenes from Miletus in Asia Minor settled in the town in 610BC to develop it as a polis, or independent city state, and it thrived on maritime trade for six centuries before being conquered by the Romans. It became predominantly Greek again later, from Byzantine times until the early 20th century. 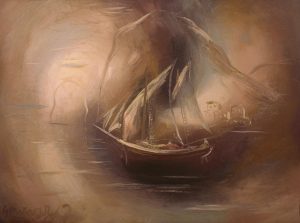 Giorgios was the youngest of six children of Elias and Anna Gounaropoulos. The young man emigrated with his family to Greece at the age of 16, after the Bulgarian government put pressure on the Greek population to cover up their ethnic identity. The family moved around Greece before settling in Athens, where Giorgios had to help support his family by seeking odd jobs from makers of signboards.

His skill in drawing was soon evident, and in 1906, he enrolled at Athens School of Fine Arts, graduating six years later, only to be conscripted into the Greek Army and sent to fight in the Balkan Wars and World War I. He then studied and worked in Paris from 1919 to 1932, returning to Greece in the 1930s, notably to paint murals for Athens Town Hall of the ancient city, based on his scrupulous research of Greek vases, coins, steles,   and statues.

In the sphere of studio painting, having dabbled at first in post-impressionism, he developed a personal style often involving fairy-tale female figures clad in delicate, transparent garments. Critics have identified these nymphs as harking back to half-remembered visions from his early days in Sozopol.

The authority on 20th century Greek painting, Yiorgos Mourelos, detected in later works impressions of the jagged rocks of the Black Sea. Mourelos said: “In his childhood eyes, the idea of travel took on a mythical dimension. An idea recalling the adventures of Odysseus, a venture into the unknown, rediscovered in these precipitous and human-like rocks that rise like strange ships from a mysterious sea.”

Thus, mystic folklore from his Sozopol days combined with poetic fantasy in the output of Gounaropoulos, who clearly had studied the stylised figures painted on ancient Greek vases. 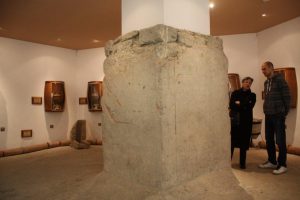 Mourelos wrote: “I dare say that Gounaropoulos is a unique phenomenon in the world of contemporary painting. He is one of the few painters of our time who remind us of those great days of art, when the genuine master had something unique to convey and devoted his entire life thereto, utterly consistent with his own, apocalyptic truth.”

Those who wish to learn more about this dedicated artist should visit the G. Gounaropoulos Museum in the municipality of Zografou, Athens . There, the former artist’s studio hosts group and school tours, while a newer building stages art exhibitions and other cultural events.

To grasp the symbolism of his ‘dreamlike’ work, says the website of the Museum G.Gounaropoulos, “one should take into account his hometown milieu and his childhood experiences.” What characterises the painting of Gounaropoulos is its deep tranquillity. “Despite the dynamism of the figures emerging from his seascapes –the rocks, women, vessels, houses, trees, flowers– water, by its presence alone, lends its own peculiar dimension in every work, the dimension of a world encompassed by a totally serene and peaceful infinity.”