How the shipping community helped Sea Cadets march with pride 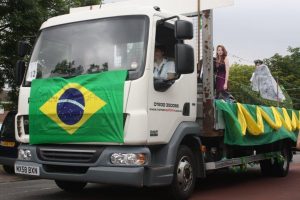 With the football World Cup in full swing at the time, a Brazilian theme was inevitable at summer carnivals around the northern hemisphere – and one local London event added to that a distinctive maritime connection.

Members of the shipping community lent their support to Rio Carnival Comes to Carshalton, in the shape of assistance for one of the main ‘floats, ’ put together by London Borough of Sutton Sea Cadets. Carshalton is within Sutton borough, a suburb of London (some 16km distant from Charing Cross), although the postal address is Surrey.

The cadets were delighted to receive significant sponsorship from Vale SA, the huge Brazilian group that mines iron ore and other minerals and is heavily involved in sea transport, ports, railways and hydroelectricity production. Valuable assistance came from Capt Marcelo Pamplona,  alternate permanent representative of Brazil to the International Maritime Organization.

The float was one of several that paraded for an hour and a half through the streets of the quiet town to Carshalton Park where there was a programme of displays by local organisations. Principal supporters of the day were Wallington & Carshalton Round Table and Carshalton Rotary Club.

The cadets owed the maritime connection to their supporter Maria Dixon, president of WISTA-UK, whose home is in the area. WISTA-UK is a leading member of the Women’s International Shipping & Trading Association. With the backing of her international maritime contacts, Ms Dixon raised funding for the float including hire of a truck that carried a group of the cadets to the fairground, and the supply of yellow and green (Brazilian national colours) textiles which were folded into swirls around the vehicle.

The float featured the two famous mountains in Rio – Sugar Loaf and Corcovado – connected by a working, moving model cable car, designed by the sea cadets specially for the occasion. This portrayed the renowned scene in the James Bond film Moonraker in which actor Roger Moore fights off his would-be assassin Jaws at the top of Sugar Loaf. The ingenuity of the float won for Sutton Sea Cadets first place as the most outstanding organisation for 2014 in Carshalton Carnival.

Five of the volunteers who lead Sutton Sea Cadets

London Borough of Sutton Sea Cadets was formed in 1940, although the origin of the unit name TS Puma has been lost as the archives from that year were mislaid.

The unit, which currently has 33 cadets aged between 10 and 18 (about half and half male and female) and six volunteer staff, is one of 400 in the UK that make up the nation’s oldest nautical youth charity. The first unit was established in 1854 at Whitstable in Kent, created by communities to give young people instruction on a naval theme.

The national Sea Cadet Corps works in partnership with the Royal Navy and receives corporate support from commercial shipping companies and the maritime sector at large. An official statement says: “Our core purpose is to celebrate Britain’s maritime heritage and contribute to its future development by supporting young people as Sea Cadets.”

Like many other units, Sutton Sea Cadets has a constant need for funding to keep its activities going and its headquarters in repair. Supermarket groups and a law firm are among those who have made donations recently to underpin the unit. Unlike their army and air counterparts, sea cadets receive no funding from the Ministry of Defence, and each unit is responsible for all fund raising.

Lt Cdr Turner, who has been commanding officer at Sutton for 19 years, and was a cadet at 12 and later served at sea, expressed his warm thanks to supporters of the group for carnival day and round the year.

He said: “We are not a pre-service organisation, and we help young people into careers and life skills: as well as the traditional seamanship, knot-tying, communications and so on, we teach subjects including car maintenance, catering and other disciplines. We turn our hand to anything, in our unit.” 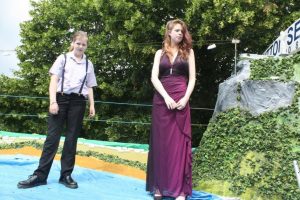 He was proud that one of the Sutton cadets this year joined the Royal Navy as an engineering officer.

The unit has a marching band which will provide music at the WISTA-UK 40th anniversary black-tie gala champagne reception and dinner on July 30 2014 at the IMO Building in London.

Another cougar for wind power