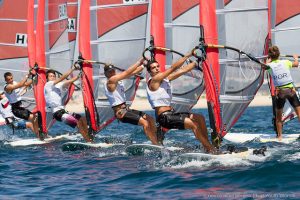 18 July 2014 – Racing at the 2014 ISAF Youth Sailing World Championship in Tavira, Portugal came to a thrilling conclusion as the medals across the eight events were decided.

For the first time in their history the Spanish team have won the ISAF Youth Worlds Nations Trophy after a controlling display. Across the eight fleets Spanish sailors picked up three gold medals and a silver. Three of the teams finished in the top ten ensuring they were the most consistent nation out of the 67 competing in Tavira. France and Israel follow the Spanish team in the on the leader board.

A beautiful westerly breeze came through early in the afternoon allowing three RS:X Boys and Girls races, two 29er races with a single race in the remaining fleets.

Racing commenced at 12:00 local time in a breeze that slowly built to 10-13 knots as the day progressed.

It all boiled down to the final race and a nervy Elfutina was unsure whether or not she had won ashore as she explained her day, “The first race was not good, in fact it was really bad, I was fifth but the next one was better and I was second. Before the last race I was second and had three points to first place and I was nervous a little bit because everybody is strong and I said okay, do what you can, and I was first and she [Hongmei] was fifth or sixth.

“It’s amazing but for now we should wait for the results because I’m afraid. When I see the results that Russia’s first then yes, that’s okay to celebrate.”

When the results were published a scream of joy from Elfutina echoed across the boat park and beyond. She added, “I feel happy. It’s all such a good feeling and I don’t believe it yet. It’s like a dream and it’s my second World Championship win and I love it.

“This is one more step to my dream of being at the Olympics and being in the adult world.

“I want to say thanks to all of the girls and organization because it was a really good competition. We’ve had a great championship.”

The Chinese sailor came away with silver and Italy’s Marta Maggetti remained in bronze medal position after a 2-3-4 scoreline.

Overnight RS:X Boys leader Yael Paz (ISR) held on to take gold after a nervy finish. With three races sailed Mattia Camboni (ITA) reduced Paz’s four point lead to one in Race 10 with a bullet. One place separated them in Race 11 with two points the difference going into the final showdown.

The mathematics had been done before Race 12 and Camboni needed to put two places between him and Paz. As Camboni stormed through to take the final race bullet he quickly turned to view the action behind him and was left downhearted when the Israeli crossed in second to seal gold.

For Paz it was jubilation, “It’s a great feeling and it was a really tough race and really tight at the end but I’m so glad I won.

“It was really tricky racing with strong competition. I won by one point in the end so it was really tight. It was really hard and before every start I had to think about what I had to. It was massive pressure but in the end I managed to deal with it and I feel great and can’t wait to talk to everyone back home.”

Camboni took six race wins across the 12 race series but ultimately it was Paz’s consistency that handed him gold with the Italian settling for silver.

The Singaporeans were relaxed on the race course and took matters into their own hands as they had a great start which they were able to transition into a good lead. As they crossed the finish line in first it was Singaporean gold, their third throughout the history of the ISAF Youth Worlds.

“I am the happiest person in the world right now, ” beamed Yeo. “We had tears of joy and I am just speechless. I will be feeling on top of the world at the closing ceremony. I am just really grateful for everyone who has helped me and my partner. My coach has phoned my parents and everyone back home, I think when I speak to them I will be speechless again.”

The Japanese pair finished 12th in the final race to drop to bronze medal position as a third from Malaysia’s Mohammad Faizal Norizan and Ahmad Syukri Abdul Aziz promoted them up to silver.

Gold and silver were decided on the penultimate day with Spain’s Silvia Mas and Marta Davila holding an unassailable lead atop of the pack with Israel’s Yahel Wallach and Stav Brokman unable to be dislodged in second.

Anything was possible in the fleet with places third to seventh capable of winning gold. In the end Poland’s Ewa Romaniuk and Katarzyna Goralska took the bull by the horns and took the final race victory and with it, a bronze medal.

France’s Louis Flament and Charles Dorange had dominated the SL16 fleet with consistent racing across the week and sealed gold with their seventh race victory on the final day.

The vibrant youngsters have been sailing together since they were seven years old and ten years on from their first outing together they are celebrating an ISAF Youth Worlds gold medal.

“This is an accomplishment of a lot of work together, ” said Dorange. “We are always progressing in sailing and always doing our best and this is our accomplishment and we are very happy to have this reward.”

Historically the French team have been strong in the multihulls at the ISAF Youth Worlds and the pair have thanks to an inspirational racer, “When we saw Billy Besson [Nacra 17 and Formula 18 World Champion] racing the SL16 we wanted to be like him because he is a World Champion. We always wanted to be like him so we are happy that we are a world champion, like him.”

Jordi and Ruben Booth walk away with silver whilst Brazil’s Kim Vidal and Antonio Lopes finish third overall. Vidal ages out of the ISAF Youth Worlds having taken one gold and two bronze medals from four events he’s competed at.

Having lost the 29er lead they had held all week on the penultimate day France’s Brice Yrieix and Loic Fischer Guillou hit back on the final day to take gold.

The pair trailed America’s Quinn Wilson and Riley Gibbs by one point overnight but were able to level the scores up after the first race of the day. With both teams on 47 points it was a winner takes all bout. The French maintained their composure and came through in sixth whilst the Americans finished 13th sparking French celebrations on the water.

A smiley Fischer Guillou added, “I feel great, this is the result we wanted.”

It was a deserved victory for the French pair who have been consistent performers on the race course throughout the 13 race series.

The Americans take away silver whilst Markus Somerville and Isaac Mchardie (NZL) walk away in bronze.

In a three way shoot out for Laser Radial Boys honours Joel Rodriguez (ESP) came out on top following a fourth place. Seafra Guilfoyle (IRL) put the pressure on the Spaniard with a final race bullet but a fourth was enough for Rodriguez as he took gold by four points.

“It was close at the end but I am really happy, ” said Rodriguez. “I started the championship really bad and yesterday I managed to get in the lead and today I was able to win. It was very close.”

The Irish racer climbed up to second overall following his bullet whilst Singapore’s Ryan Lo fell to third, discarding his 19th in the last race.

Martina Reino (ESP) made it double Spanish Laser Radial gold as she stylishly took the hnours with a final race bullet. Across the nine race series the Spanish sailor has amassed four race wins and finishes 11 points ahead of Haddon Hughes (USA) and Monika Mikkola (FIN).

After racing Reino said, “I had a very good start and then the race was easy. I sailed very well to finish first and it was just perfect. I have no words to describe it because winning a world championship is a dream. It’s crazy, I am very happy.”

Hughes and Mikkola ended up tied on 50 points but the American takes silver having picked up one more race win than the Finnish sailor.

Focus now turns to the closing ceremony which will take place outside of Tavira’s Town Hall at 20:30 local time.