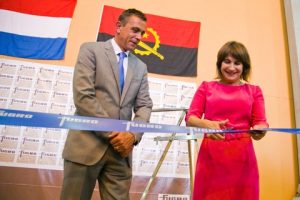 Leidschendam, The Netherlands,  22 July 2014 – To accommodate the future needs of the rapidly growing Angola offshore oil and gas industry Fugro has opened its new facility in the SONILS Oil Service Centre in Luanda. Angola is now the second largest oil producer in Sub-Saharan Africa, after Nigeria.

The official opening of the facility on 10 July by Mrs Lilianne Ploumen, the Dutch Minister for Foreign Trade and Development Cooperation, was attended by the Angolan Minister for Construction, Waldemar Pires Alexandre as well as the Secretary of State of the Ministry of Petroleum, Eng. Anibal Silva; the Dutch Ambassador to Angola, Mrs Susanna Terstal; and local dignitaries and clients.

“Our new site demonstrates Fugro’s strong commitment to the Angolan market, ” said Ms Christina Brokahne, Managing Director of Fugro Angola as she took Mrs Ploumen and guests on a tour of the facility, which comprises a building area of approximately 7, 000 m2. 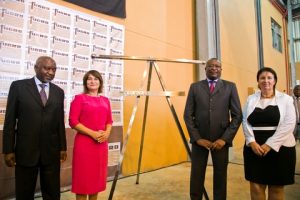 The new site hosts a double storey administrative building housing offices, conference rooms, a training facility and staff canteen. Attached to the office building is a large warehouse facility of 2, 500 m2 with a 20-ton overhead crane and ample storage space, as well as workshops for equipment testing and maintenance, a dedicated area for subsea equipment and ROV tooling and a large state-of-the art geotechnical laboratory.

The ceremony also provided an opportunity for Fugro Angola to demonstrate its practical support for the ‘Challenge the Silence’ programme of the Forum de Mulheres Jornalistas para a Igualdade no Genero. Mr Herivaldo Augusto, Director Fugro Angola Limitada and Mr Wilhard Kreijkes, Fugro Regional Director Africa together with Mrs Ploumen presented a cheque to the charity, which raises awareness of gender equality and domestic violence in Angola.

ABOUT FUGRO
Fugro creates value by acquiring and interpreting Earth and engineering data and providing associated consulting services to support clients with their design and construction of infrastructure and buildings. Fugro also supports clients with the installation, repair and maintenance of their subsea infrastructure.
Fugro works around the globe, predominantly in energy and infrastructure markets offshore and onshore employing approximately 12, 500 employees in over sixty countries. In 2013 Fugro’s revenue amounted to € 2.4 billion, it is listed on NYSE Euronext Amsterdam and is included in the AEX-index.