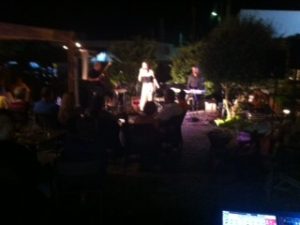 As we have mentioned in previous reports and articles, this summer’s first tip for your holidays is that of Chios and in particular at south west where the fishing port and tourist resort of Lithi beach stands. One of the focal points is the Almiriki hotel and apartments, a traditional built resort with all the facilities you more or less need to unwind from your business life and beyond…

For the last four years Almiriki offers a lot of summer events to boost the visitor’s moral but also to contribute to the enhancement of peace – a much needed …ingredient, on both sides of the Aegean  Sea.

This summer’s events opened last night with a concert starring Fide Koksal and special guest George Milonadakis. Titled the “Flavour from the East” a special voice a unique voice from Izmir. Fide is married with a Greek and when she performs you think she’s Greek too! Both her Greek, Turkish and international repertoire were warmly greeted by the 150 plus faithful.  Nassos Sopilis (piano) and Michalis Katahanas (violin) greatly complemented the event which lasted until the early morning hours. There was dancing too and with the excellent drinks and dips everybody had a great night; congrats! 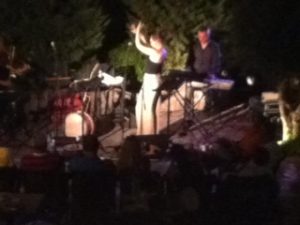 There are four more events to come at the same venue: On Saturday the 9th of August there is a concert with Stavros Papastavrou titled Hosgeldiniz, which means welcome in Turkish. Turkish songs, Greek songs, traditional or modern ones. Songs which the Greeks think they are Greek whilst same are Turkish, and Turkish songs which as Greek ones and Turks think they are theirs… Alkistis Raftopoulou (piano), Nikos Kotaras (contra basso) Fortis Mylonas (mandolin) and Soktrates Ganaris (percussion instruments) complement the event.

On Sunday the tenth of August there is Lithi’s big fiesta with The Stroubakis-Lignos orchestra down the fish-port of Lithi! Not to be missed. The event is organised by the Embellishing and Cultural Association of Lithi “The True Port” and many local folk dancing groups will perform.

On the 23rd of August a concert with Evangelia Tsiara promises a great evening in her second appearance there. Titled “With a breath” this solo presentation looks it is already booked. Hurry to …book so you are not disappointed…

Finally on the 24th of August “Karagiosis and his troubles” , the greek Tin Tin is there with Stavros Spyrakis.

Reflecting on the proceedings of the 3rd Mare Forum in Cyprus