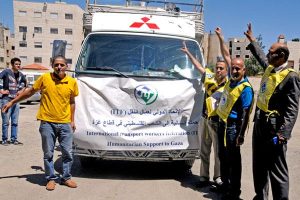 The ITF today (Monday) delivered a first shipment of medical supplies to Gaza – where hundreds of civilians have been killed – and called for an immediate ceasefire there.

The federation is organising a trade union relief effort to get desperately-needed supplies to the area. Today’s cargo is expected to be the first of several, and was made up of materials requested by doctors helping the wounded, such as wheelchairs and crutches, and thousands of rolls of bandages, syringes, facemasks, gloves and dressings.

Purchased and dispatched by the ITF office in Jordan, the supplies were delivered this morning to UNRWA (United Nations Relief and Works Agency) and the Jordan Hashemite Charity Organization, whose support includes the running of a mobile hospital in the conflict zone. The supplies were sent by road, with the Jordan office maintaining regular contact with the ITF-affiliated Gaza Bus Drivers General Union in the Gaza Strip.

ITF president Paddy Crumlin commented: “The situation in Gaza is desperate. There is a need for an immediate ceasefire before even more civilians are killed. We strongly echo and support the continuing calls by the ITUC (International Trade Union Confederation) for action in line with the UN Security Council resolution that called for ‘de-escalation of the situation, restoration of calm, reinstitution of the November 2012 ceasefire and respect for international humanitarian law, including the protection of civilians.’”

He concluded: “We firmly believe that a cessation of hostilities must be followed by renewed international pressure to achieve a long term solution, including the end of Israel’s occupation of the West Bank and a negotiated settlement that respects the 1967 borders between Israel and a Palestinian state. It is time that the rights of the Palestinian people are fully recognised in line with UN resolutions.”

Donations to help those affected can be made as follows: