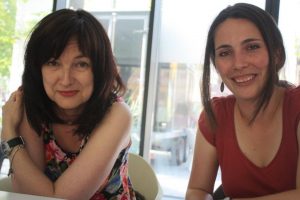 From a cultural standpoint, it has been a good summer for the Jewish community in Europe.

There have been many events paying homage to Jewish culture, and one of the newest such celebratiory experiences is now firmly on its feet, in Košice, Slovakia.

The Mazal Tov festival, taking its title from the expression meaning “good luck” on hearing  pleasant news, has become the first of its kind in Slovakia, where in common with other central European countries, the Jews suffered abominably at the hands of Nazis and their fascist supporters.

In three days starting July 4, the city of Košice hosted performers and speakers from near and far who set the flavours of an often overlooked cultural heritage before the wider public. 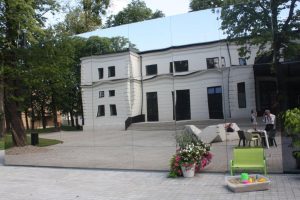 The Košice event is small in comparison to some similar events, especially to the Jewish Culture Festival of Kraków which  is the oldest and possibly biggest representation of contemporary Jewish culture and dates from 1988. In the Polish city, the week-long event draws up to 30, 000 spectators each year.

Like their counterparts in Kraków, the Košice organisers are determined to focus on the future for Jewish life and achievement, rather than on the past, and place emphasis on its diversity, which is often most easily accessible to non-Jews through music.

Since Košice hosted its first Mazal Tov festival in 2012, the reach and audience of the occasion has grown, and this year its move to a brand new principal venue provided a tremendous boost . The venue is Kasárne Kulturpark – a 19th century military barracks that has been converted to a centre of contemporary art, with exhibition and concert halls and workshops for creative activity. 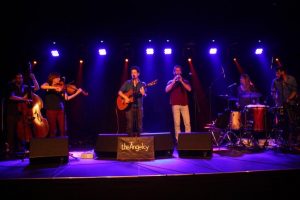 Jana Šargová,  programme manager and co-founder of Mazal Tov, said that the festival strongly featured music, “because music is the international language.” It helped foster understanding regardless of faith, colour or creed.

Ms Šargová , who became fascinated by Jewish history while studying at university, aims to promote interest in the culture year-round: “In future we want to engage students and other young people more and more. We should like to do some events once a month because we want to make further use of our diversified resources.”

The Mazal Tov festival has been supported by grants from the Slovak ministry of culture within the European Capital of Culture 2013 programme, and from the Bratislava-based International Visegrad fund, founded by the governments of the Czech Republic, Hungary, Poland, and the Slovak Republic, to support cultural, scientific and educational projects.

The Mazal Tov festival was notable too for the appearance of perhaps the most famous blogger in Košice, Beáta Beregrad Grünmannová. Her stylishly written articles in Slovakian are published by the leading newspaper SME. She is determinedly independent in her accounts of life in her home town, in her book reviews, her poetry, and sometimes about Jewish topics.

Her sense of humour is at times self-deprecating, but is deeply appealing, as are her free-thinking ways. She took up writing in this form during a period of illness eight years ago, and estimates that each piece has a readership of 5, 000 to 10, 000, and annually 250, 000. 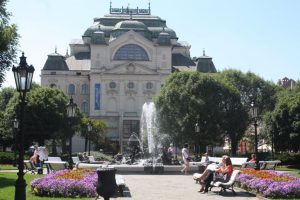 Her humanity sparkles as she writes: ““I love our colourful Košice, ”  and says of the local Roma people, who have been the target of some hostility, that they should be accepted as “part of the local colour of the Old City.”

In one piece entitled “Migrants in my living room, ” she welcomes incomers, insisting that every one of them “has something enriching” to offer, and she does not mean by way of the taxes or rent they pay. All are fine by her: “the ice cream king, goldsmiths, market people, shop owners, students, beauties in the hijab, a mixture of Greeks, Arabs, Israelis, Scandinavians, Americans from the [US Steel] factory, Ukrainians, Czechs, because it’s great.”

In a summer evening, exults Ms Grünmannová , the cafés on Hlavná ulica (Main Street) will be busy with a cheerful cacophony of many languages, rather than a monolithic uniformity. She adds, loosely translated: “So dear migrants, just come in and if you want, stay. Everyone fits here, I’m not afraid and whoever will, let them live in the open-air museum, it’s his or her choice.”

In another article about the competing claims of foods that are marketed, she urges readers: “Do not be sheep, but empowered consumers.”

She jokes that she is a dilettante of many kinds: a gymnast who cannot do a handstand, a golfer with a green card who cannot play, a person who files short texts but whose ambition is to type bigger articles.

In promoting its Jewish heritage through festival events, Košice has joined a list of many big-league cities. These include – besides Kraków there are many others in Poland including Warsaw – Berlin, Weimar, Budapest, Bucharest, Vienna, Milan, Copenhagen, London, Paris, and others in the Czech Republic and the Netherlands.

After years of tribulation in Europe, the Jewish community has doughty champions both from within and outside its ranks who are making their voices heard. This is vitally important at a sensitive time when against a background of momentous events on the world stage, violent anti-Semitism has been on the rise.