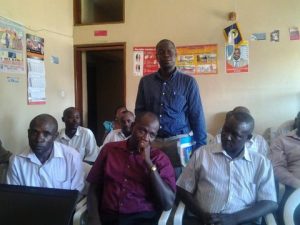 7 August 2014 – The ITF’s largest affiliate in Uganda has signed a memorandum of understanding with the Entebbe Stage Drivers and Conductors’ Association, boosting its membership to close on 9, 000.

The MoU, signed by the Amalgamated Transport and General Workers Union of Uganda (ATGWU) on 30 July, covers operators of taxis and minibuses from Entebbe International Airport.

ATGWU general secretary Azizi Kiirya said: “This is the seventh and biggest association to join us, and brings an additional 1, 200 new members. The transport sector can only become stronger when the rights of all forms of transport workers are protected. That’s why we need ongoing support from the ITF as we continue to organise workers in the informal sector.”

ITF Africa regional secretary Joseph Katende congratulated the ATGWU and commented: “It is practical brotherhood, strategic innovation and adaptation to new concepts in trade union work that have kept the ATGWU alive and growing. We praise your commitment to engaging with informal and precarious transport workers.”

Five informal workers’ associations announced their affiliation to the ATGWU during a workshop in Kampala which brought together women activists from unions in Kenya, Tanzania and Uganda to share and learn new practical techniques to build informal women transport workers’ union power.

The ATGWU is one of the mentor unions in the ITF’s informal transport workers’ project, which is supported by FNV Mondiaal.