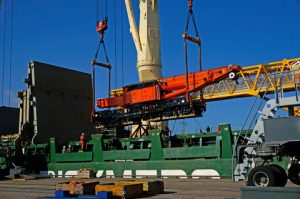 “One of the six Kirow railway cranes being loaded onto the Rickmers Singapore at Wallmann Terminal in Hamburg”. Photo: Rickmers

Hamburg,  25 August 2014 – Rickmers-Linie, the Hamburg-based liner carrier for break bulk, heavy lifts and project cargoes has again been chosen by Kirow for the transportation of railway cranes from Hamburg to Xingang. The shipment in August marked the continuation of a long-standing relationship between the two companies, but was nevertheless a special shipment. It contained six cranes of the type KRC 2880. 20 more units of the type KRC 1680 are to follow into 2015.

Kirow has been a long-term supplier of the Chinese railways. The company has already delivered a number of railway cranes for the ever expanding railway network in China. The cranes are used in various railway administrations throughout the country.

Kuehne & Nagel in Leipzig and Hamburg took care of the freight forwarding and the booking of the six cranes. The cranes were transported to the Wallmann Terminal in the Port of Hamburg by barge and road transport.

The ocean leg from Hamburg to China is being performed by the Rickmers Singapore which will arrive in the port of Xingang in late October. The 2002-built Super Flex heavy-lift vessel can lift up to 640 tons and is one of nine identical sister vessels in theRound-the-World Pearl String service of Rickmers-Linie. This service rotates eastbound around the world,  linking Europe, Southeast Asia, the Far East,  North America and again Europe.

More information about Kirow can be obtained on www.kranunion.de/de/kirow/

Rickmers-Linie is one of the world’s leading specialists in the global transportation of break bulk, heavy lift and project cargo by sea.

With regular sailings and reliable schedules, the company has set new industry standards. The “Round-the-World Pearl String Service” connects the core business areas of the world. Liner services between the US, Europe and the Middle East/India as well as special charter sailings on demand add value for the globally active customers. In March 2013, Rickmers announced the inauguration of its new Westbound Round-the-World Service.

The company belongs to Rickmers Group, which offers diversified activities in the segments of Maritime Assets, Maritime Services and Rickmers-Linie. Rickmers Group currently manages a fleet of close to 100 vessels.

Information about the manifold activities of Rickmers Group is available at www.rickmers.com