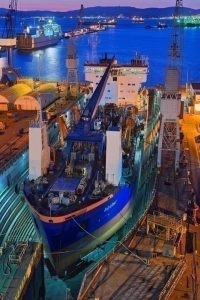 Part of the Van Oord fleet, the 137m long trailing suction hopper dredger, Lelystad,  has been through an extensive programme of works at Gibdock in Gibraltar. The vessel was in dock for an initial 26 days, then went alongside the South Mole before re-docking for a further 11 days.

The far-reaching project included steelwork, pipe, mechanical and painting work. The steelwork required inside the hopper tanks proved particularly challenging due to limited space for access. This was the second time Lelystad had been drydocked in Gibraltar, following a visit in 2008.

Gibdock’s Production Director, John Taylor says: “Lelystad’s return to our yard shows that the combination of good location, excellent climate, safety, service and craftsmanship we offer can combine to attract even special visitors, like this dredger. Dredgers are by no means our bread and butter, but we get a regular stream of work from operators who know we have the capabilities to handle the heavy duty repairs often required on such vessels.”

The job saw the yard repairing and renewing around 300m2 of doubler plates inside the hopper, with damaged plates removed and new plates welded into place. In total around 15.2 tonnes of steel was replaced, with very constricted access via the hold doors.

Another significant part of the project involved extensive work to the Lelystad’s deck crane. All four bogies were removed and new ones fitted, while the crane track rack was also removed, the foundation rail realigned through the use of heating and straightening, and a new rail welded into place. The crane’s gearbox was removed ashore, overhauled and machined, and a new pinion fitted. Hydraulic cylinders operating the bottom doors of the hopper, 12 units in all, were removed and taken ashore for overhauling by the manufacturer. Gibdock also removed and replaced the vessel’s tailshaft and coupling.

The project also required a large amount of pipework.  Almost 68m of pipe had to be fabricated and fitted in place to serve a new fuel oil mixing tank, while 108m of pipe of various sizes was renewed elsewhere onboard. Other elements of the project included the fitting and welding in place of new hull liners; fabrication and fitting into place of a new MOB structure, comprising a walkway, platform, boat cradle and davit support pillar; installation of 19 new bridge windows, and renewal of aft ventilation  structures.

Frank Dekeukeleire, technical superintendent, Van Oord Ship Management, says: “This project went very well. Gibdock finished the job on time and were flexible in their work processes. It is also clear that over the past few years they have put a lot of effort into  improving their safety regime, and this is good to see because safety is a big priority onboard our ships.”

The State of Piracy