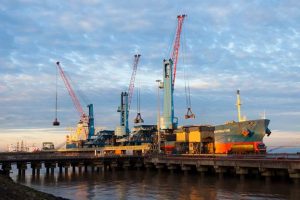 Official Government trade statistics have confirmed the central role that the Humber ports in general and Immingham in particular play in the economic life of the region and country.

The figures underline the vital regional and national economic role played by all the Humber ports.

A series of significant investments by ABP in the Humber ports has driven development of the business. Last year saw the opening of the £26m Grimsby River Terminal to support the growing vehicle handling trade and ABP is investing £150m in biomass handling facilities at Immingham and Hull in a Humber wide agreement with Drax Power Ltd. Together with Siemens, ABP is also investing £310m in new manufacturing facilities for the offshore wind industry in Hull and East Riding.

John Fitzgerald, ABP Director, Humber said: “The Port of Immingham has once again managed to grow its business whilst the UK port sector as a whole stagnated. This is testament to the efforts our customers make to move traffic through this vital gateway.

“Since 2000, throughput at Grimsby and Immingham has grown 20% on the back of hundreds of millions of private sector investment in infrastructure and equipment. Our customers, the region and the UK’s economy as a whole need ABP to continue to invest in Immingham to develop facilities that support trade and deliver jobs.”

The four ports of Grimsby, Immingham, Hull and Goole handle more than 65 million tonnes of cargo each year. Between them they contribute £2.2 billion to the UK economy and support 33, 000 jobs nationally.