ESPO Port of the month: the Port of Gdansk

Monday, 01 September 2014 12:50 – This month, we want to put the port of Gdansk in the picture. As a steadily growing port in Eastern Europe, Gdansk definitely deserves a place in our “Port of the Month” column. Moreover, the port’s Marketing Director, Julian Skelnik is Vice Chairman of ESPO.

Could you present us the port of Gdansk? What are its main characteristics?

The port of Gdansk is the largest Polish seaport. It operates as the main hub port for container traffic on the Baltic Sea. The hinterland of the port’s activity is a market worth millions of people from Poland and the neighbouring countries. Port of Gdansk is being intensively developed and modernized, which leads to further rapid growth in container traffic. 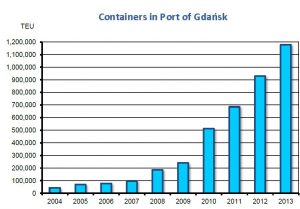 Containers in the port of Gdask

The new TEN-T policy gives core seaports like Gdansk a prominent place in the network and as part of the multimodal corridors? What has been your experience so far? What do you expect from the new policy? Will it open a lot of opportunities for the port of Gdansk?

Poland and, consequently, also Polish ports are in this peculiar moment that, while they are developing their rail and road systems, they also develop their hinterland. The new TEN-T policy, which gave Gdansk the status of a core seaport, enables the port to strengthen the position that it used to have in the past. Moreover, it also stipulates the port’s areas of development.

The alliance between shipping lines has been a hot topic in the port industry for the last year: “P3”, “2M”… How is the port of Gdansk looking at these developments?

basen-gorniczyWe see no reason why the natural process of capital concentration in the transport chain should in any way be hindered. We shall remember that the European Union is often blamed for its tendency to regulate. No matter how strongly P3 and 2M are criticised, they are the element of a competitive advantage of European ship owners on a globalised transport market.

You know that ESPO has been investing a lot of efforts over the last years in finding ways to optimise the integration of the ports into the city and local community? Is this also a challenge for Gdansk?

What is your main message regarding the port Regulation proposal that will be high on the agenda of the Council and the new Parliament in the autumn?

The Polish legislation has good Regulations that are dealing with most of the problems on which the port Regulations proposal is based. As a port, we are against the implementation of too many Regulations that could restrain natural market processes. We believe that the “best independent supervisory body is the port next door”. 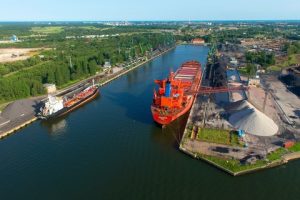 Are there other big challenges ahead for the port of Gdansk? Can “Brussels” and the European policy contribute in addressing these challenges?

One of the biggest challenges for Gdansk and for other ports in the Southern Baltic region is to create a complex offer that will attract goods from Central and Eastern Europe in order to use their facilities. One of the key tools that could contribute in addressing this challenge is the process of the integration of hinterland’s inland transport systems.

You know that ESPO is a partner in PORTOPIA, a FP7 project aiming to develop a system to measure the performance of ports on the basis of indicators. Is Gdansk taking initiatives in that field? How does the port measure its performance?

The port of Gdansk actively participates in the PORTOPIA project by supplying the project partners with data.dct

Except for its turnover, the port of Gdansk uses the following indicators to measure its performance:

VIKING steps up the pace of innovation at SMM