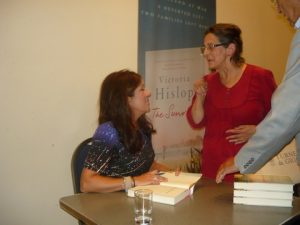 Victoria Hislop signing one of the books

Last night at a full house in London’s Hellenic Centre, the world acclaimed author and specialist on Hellenic novel/stories, Victoria Hislop talked about her new book “The Sunrise”!

Over 260 people attended with the Great Hall bursting to its seams as well as the roof balcony; never ever before the launching of a book attracted so many people. Hellenes from Cyprus and the mainland, British, Americans, you name it where there. Amongst them Ian Hislop – Victorias’ husband  with  yet another big smile, MP David Burrowes, George Georgiou, the Consul General of Cyprus together with Cultural Counsellor Achilleas Hadjikiriakos, members from the Education Office of the Greek Embassy, members of the Greek Shipping fraternity and many many others… 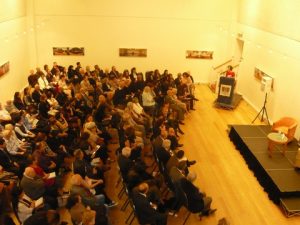 Before the launching /discussion started, the Mayor of Famagousta (Ammochostos) Alexis Galanos handed a small plaque with a lemon leaf!

Victoria was introduced by Victor Sebestyen from  her publishers group headline. Will review the book, but until then, just make a note*:

“In the summer of 1972, Famagusta in Cyprus is the most desirable resort in the Mediterranean, a city bathed in the glow of good fortune. An ambitious couple open the island’s most spectacular hotel, where Greek and Turkish Cypriots work in harmony.

Two neighbouring families, the Georgious and the Ozkans, are among many who moved to Famagusta to escape the years of unrest and ethnic violence elsewhere on the island. But beneath the city’s façade of glamour and success, tension is building.

When a Greek coup plunges the island into chaos, Cyprus faces a disastrous conflict. Turkey invades to protect the Turkish Cypriot minority, and Famagusta is shelled. Forty thousand people seize their most precious possessions and flee from the advancing soldiers.

In the deserted city, just two families remain. This is their story…”

An excellent reception followed with drinks and dips, lots of discussion on the book and three queues awaiting to congratulate Victoria and “obtain” her dedicated signature… Will revert soon with our review. 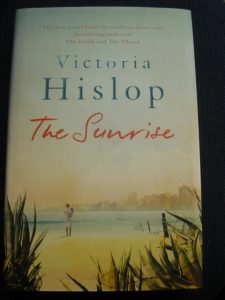 *From the inside cover of this masterpiece

** Other Victoria Hislop book events at the Hellenic Centre: