The steel-cutting ceremony, marking the formal start of a ship’s construction process, took place at the Daewoo Shipbuilding & Marine Engineering Co., Ltd. (South Korea) shipyard in the presence of representatives from OAO Sovcomflot, the Russian Maritime Register of Shipping (RS), the ship classification society Bureau Veritas (BV) and other guests.

OAO Sovcomflot provided JSC Yamal LNG with advisory services for gas tanker design and the minimization of costs for the project’s logistic support, based on the company’s long-term experience in the Arctic seas and with the operation of its own LNG carriers. Eventually, the partners developed a unique design for the new ship codenamed ‘Yamalmax’ with unsurpassed performance features anywhere worldwide.

With a freight capacity of 172, 600 m3, length of 300 m and beam of 50 m, the tanker will be of Arc7 ice class (on RS classification) which will ensureicebreaking capability in a 2.1-metre thick ice field. The ship’s propulsion unit includes three azipods delivering a total power of 45 MW, which is comparable to a Rossija-class nuclear-powered icebreaker (55 MW). Reinforced membrane-type tanks ensure safe LNG transportation along the Northern Sea Route, which has been confirmed by classification society surveys and test-bed trials held by GTT, the cargo system designer.

It is planned to use the Russian-flagged prototype vessel for training the crews of Arctic LNG tankers and practicing navigation in the severe ice conditions of high-latitude Arctic seas. 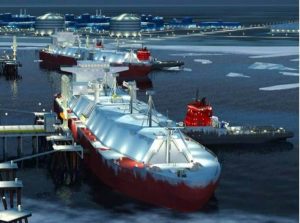 OAO Sovcomflot (SCF Group) is Russia’s largest shipping company and a world leader in the maritime transportation of hydrocarbons, as well as the servicing and support of offshore exploration and oil & gas production. The company’s fleet (owned & chartered) specialises in hydrocarbon transportation from regions with challenging ice conditions and includes 153 vessels, with a combined deadweight of 12.7 million tonnes. One third of the fleet comprises high ice-class vessels. The expansion of LNG transportation was acknowledged as one of the key priorities in the company’s development strategy. SCF’s gas-carrying fleet amounts to 11 ships, another three are under construction. SCF Group is the largest operator of ice class LNG carriers in the world. Sovcomflot supports large-scale offshore energy projects in Russia and overseas, including Sakhalin-I, Sakhalin-II, Varandey, Prirazlomnoye, Tangguh, Escobar and Peregrino. The company is registered in Saint-Petersburg and has representative offices in Moscow, Novorossiysk, Murmansk, Vladivostok, London, Limassol, Madrid, Singapore and Dubai. www.scf-group.ru

Upturning the Cyprus Economy – The role of Shipping