Jonas Hansson at Oresund Heavy Industries is the Compass Rose 2014 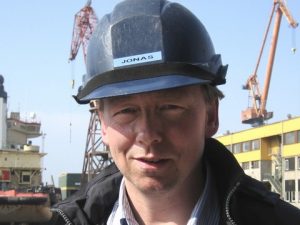 Jonas Hansson, CEO and Chairman of the BOD, Oresund Heavy Industries, is this year’s winner of WISTA Sweden’s leadership award, the Compass Rose.

”With courage, visions
and the hard hat firmly in place, Jonas Hansson has created a diamond from a catastrophe, Oresund Heavy Industries in Landskrona, Sweden. The organisation is characterized by professionalism, efficiency, persistence
and laughter. Jonas Hansson has gathered a team of good leaders, where he most often is the one to meet authorities and politicians
as well as customers and contractors.”

WISTA Sweden’s leadership award, the Compass Rose, is awar yearly to highlight a leader within shipping and trading that combines a visionary and goal-oriented leadership with great commitment for his or her organisation.

The members of WISTA Sweden, the Swedish branch of the global network for female executives in shipping and trading, nominate candidates for the award. A jury select three names, interview references and then choose an awardee. WISTA Sweden’s Compass Rose was presented to the awardee at the celebration of World Maritime Day on September 25, 2014.

KPI to enter into regional federation