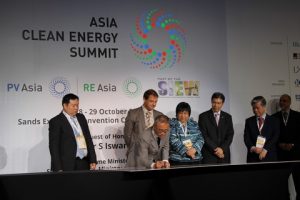 Singapore – Leading classification society ClassNK (Chairman and President: Noboru Ueda) has announced the launch of a new feasibility study for a new marine renewable energy testing facility to be built in Singapore. The announcement was made at the 2014 Asian Clean Energy Summit held in Singapore on 28-29 October 2014. The study will pave the way for the establishment of the world’s first marine renewable energy testing facility to be located in the tropics.

The new study will assess the feasibility of establishing a testing facility for 1/5-1/10 scale tidal wave generator systems in the waters off the coast of Singapore,
including surveys of tidal forces, as well as environmental and operational viability assessments. This work will be carried out by a consortium led by ClassNK and the Energy Research Institute @ Nanyang Technical University (ERI@N), with support from other leading research institutes and consultants including the European Marine Energy Centre (EMEC), Denmark-based water and environment consultants DHI, and oil, gas and mining infrastructure development specialists Fugro. Professor Subodh Mhaisalkar, Executive Director of ERI@N, highlighted the importance of the project and the participation of ClassNK: “Our goal is to make Singapore a leader in the new maritime energy technology and we consider this facility an important step to achieving that goal.

ClassNK, with its incredible background in maritime energy and offshore research, and extensive experience assessing both maritime and offshore structures, is the perfect partner to help verify the feasibility of this innovative new facility and we are excited to be working with them on this important project.”

While a similar facility was previously established at UK-based EMEC, the success of this feasibility study would facilitate the establishment of the world’s first facility capable of practically testing renewable marine energy technologies in high temperature tropical waters such as those found in Southeast Asia.

By verifying the feasibility and practicality of the new testing facility as a third party certification body ClassNK hopes to help contribute to the widespread
development and use of new marine renewable energy technology.