Round table “ITF Campaign Black Sea of Shame: what shall ship owners expect” in Odessa, Ukraine 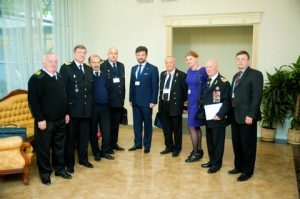 On the 23rd of October 2014 in Odessa, the sea capital of Ukraine, Interlegal together with the Nautical Institute of Ukraine (branch of the Natical institute of UK) organized a Round Table called «ITF Campaign “Black Sea of Shame”: what shall ship owners expect». Chosen round table format obviously proved – this is the only format which can provide the most comfortable and productive work for over 80 representatives from shipping industry: ship-owners, technical managers, marine agents, harbour masters, experts from the Ukrainian Marine and River Inspection (Ukrmorrichinspektsiya) and the State Enterprise “Administration of Sea Ports of Ukraine”, representatives of classification societies, maritime lawyers. The welcome speech was held by Vladimir Torskiy, the Honoured Secretary of the Nautical Institute of Ukraine. The Round Table was moderated by Arthur Nitsevych, partner of Interlegal and Head of the Nautical Institute of Ukraine.

No wonder that the round table was devoted to the captioned theme: International Transport Workers Federation (ITF) recognized Black Sea as the worst in the world upon vessels quality and working conditions. ITF representatives spotlighted such theme for the first time in public having released the report “Black Sea of Shame” and documentary film “Dark side of Black Sea: seafaring in substandard vessels”. The task of round table participants was set to study the reasons of such accusation announced for the whole Black Sea transport industry.

Sergey Kalitenko, senior lawyer of Interlegal, in his presentation uncovered reasons for negative assessment of Black Sea transportations based on actual facts and general information, from one hand, and revealed subjectivity of such assessment, from the other hand. 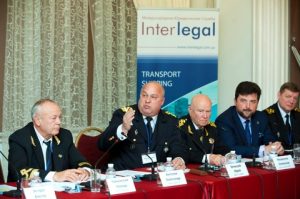 In fact, statistics of insurance events (marine casualties and incidents) shows that for the last ten years the Eastern Mediterranean and Black Sea were runner-ups after the South-Eastern Asia as for total vessel losses. In 2013 the amount of sunk vessels still remained high (9); moreover, the region ranked first in the world in the amount of reported marine casualties and incidents (464). Statistics of incidents in Black Sea and Sea of Azov shows that most of marine casualties took place on vessels over 20 years old, the technical condition whereof did not comply with safe navigation standards. The age of most of the vessels operating in Black sea (over 1500 units from 2200) exceeds 20 years. Moreover, nearly 800 vessels are over 30 years old while less than 500 vessels are under 10 years old. Despite the fact that coastal state flags prevail in this region (Turkey, Russia, Georgia, Moldova, Ukraine as well as Belize, Panama and Malta) there is quite a high correlation between the fleet based in Black Sea and flags in the Black List of Paris Memorandum (Togo, Cambodia, Moldova, Sierra Leone, Tanzania, the Comoros, St. Kitts & Nevis, Lebanon). Due to the fact of old vessel registration under convenient flags, the vessels under Black Sea state flags (except Moldova) were excluded from the Black List of Paris Memorandum. Comparison of the results of sea vessel inspections performed by port states – members of Black Sea Memorandum – for the years 2011-2013 shows that percentage of detected problems still remains high (65%).

When the ITF experts called Black Sea “the Sea of Shame”, they obviously did not comply with provisions of IMO Resolution A.787(19) “General Procedural Guidelines for Port State Control Officers” (supplemented with Resolution A.882(21)) and made a subjective assessment of the term “substandard shipping industry”. The following shall be deemed as criteria for the term “substandard” and shall serve as grounds for total detailed vessel inspections: 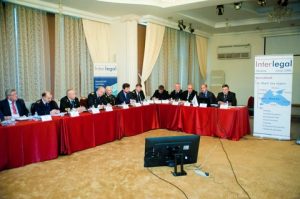 The speaker emphasized that the abovementioned factors are typical of the whole region. But it is also obvious that marine casualty a priory cannot correspond with the vessel’s flag registration, absence of insurance and sizes of a shipping company. Small and medium companies take care of their vessels even more often than large companies. The last provide the minimal safety measures due to their accumulated problems, lack of current assets etc. Only the state support of industry can radically improve critical condition of the fleet. It can be either direct state financial assistance by means of grants for shipbuilding and compensations for disposal of old vessels, or the complex organization and administrative assistance by means of cargo booking for national carriers, tax benefits for national shipbuilding and ship repair industries as well as preferences for vessels re-registration under the flag of Ukraine etc.

The arisen issues caused a keen interest, vivid dialogue and constructive discussion among the present experts from shipping industry. Vladimir Zaporozhan, representative of the Ukrainian Danube Shipping Company, reported the absence of such preferences in cargo booking and transportation tax benefits. He also proposed to discuss the grounds for charging payment for administrative procedures of vessel control by port state, necessity of unification, simplification or release from payment for mentioned inspections.

Harbour masters StanislavNezavitin (Illichivsk Commercial Sea Port) and Leonid Tchaikovsky (Yuzhny Commercial Sea Port), as well as YuriyBelskiy, Head of Navigation Safety Service of the State Enterprise “Administration of Sea Ports of Ukraine”, and YevgeniyKuznetsov, Director of the classification society “Bureau Veritas Ukraine”, shared their own opinions upon the procedure of sea vessel control in North-Western Black Sea ports. Nowadays harbour master administrations provide services based on commercial agreements because they belong to structure of the business entity – branch of the State Enterprise “Administration of Sea Ports of Ukraine”. Port state control inspections are performed at ports separately from harbour masters. In order to correct such situation, there shall be created the Single State Transport Safety Service of Ukraine by means of merging the Ukrainian Marine and River Inspection, the Ukrainian Transport Inspection and re-subordinating the State Special Transport Service. Harbour master administrations shall be assigned from the State Enterprise “Administration of Sea Ports of Ukraine” to this new Service which shall perform all the international obligations of Ukraine upon transport safety. As a positive step, participants proposed to perform preliminary vessel inspections by representatives of classification society before port state control inspections.

It is noteworthy that due to implementation of the EU-Ukraine Association Agreement, the Ministry of Infrastructure creates regulatory framework on the grounds of EU Directives. In the context of further changes, ship-owners and their representatives (marine agents, lawyers etc.) have a unique chance to propose their own prospects (new format) of regulating relationship with port control authorities, in particular regarding vessel inspections.

A separate discussion started around issues connected with quality of training officers and ratings on sea vessels, creating and implementing of the Safety Management System for shipping companies. This discussion was initiated by YuriyVolkov, Director of Seatron Shipping Ltd., who expressed its own opinion that in most cases marine casualties are more related to decision making mistakes by crew members in critical situations of vessel operation, rather than to vessel condition. YuriyChvyrov, harbour master of Intresco Company, Professor Vladimir Shapovalov, member of the Nautical Institute of Ukraine, as well as representatives of marine agents made their own opinions and proposals. Trade unions were represented at the event by Natalya Yefrimenko, ITF inspector, and MaksimSliusarevskiy, Head of Public Council of the Ukrainian Marine and River Inspection, on behalf of the Trade Union Federation of Ukraine. 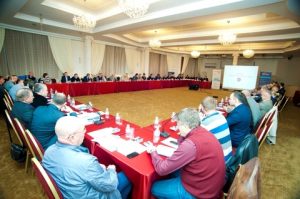 At the end of the event Boris Khrebtov, Director of Maxmarin LLC, member of the Nautical Institute of Ukraine, spoke about procedure of defending interests of shipowners, masters and crew members against potential unlawful claims of control authorities. The most active participants contributed final conclusions at the end of the event.

Summing up reports and emotional discussions, participants concluded the following:
1. Strong need in creating a simple, comprehensive and single vertical of port state control in compliance with international conventions on safe navigation;
2. The need in unanimous definition of the term “substandard vessel” as reworded by the International Maritime Organization (IMO). Recommendation to avoid using the term “substandard” in respect of seafarers, companies, organizations and maritime industry in general;
3. Actively involve all shipping companies, organizations, associations and trade unions into discussion, preparation and implementation of new standards and regulations by state and control authorities aimed to stipulate shipping companies’ activity.