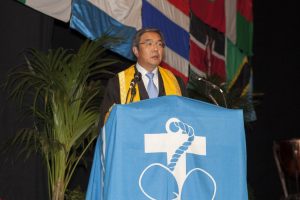 On Sunday, 2 November, WMU’s Chancellor and Secretary-General of the International Maritime Organization (IMO), Mr. Koji Sekimizu, conferred postgraduate degrees on the World Maritime University’s Class of 2014. In total, 124 students graduated from the Malmö-based M.Sc. program in Maritime Affairs, 47 from the M.Sc. program in Dalian, China, 36 from the M.Sc. program in Shanghai, China, and 19 from the distance-learning Postgraduate Diploma in Marine Insurance. Overall, the graduates in the Class of 2014 represented 49 countries, and this graduation ceremony brought the total number of WMU graduates to 3, 889 from 165 countries.

In his opening remarks, WMU Acting President, Professor Neil Bellefontaine, noted the inherently international nature of shipping, and that WMU is also inherently international since it was founded by the International Maritime Organization (IMO). Each year, students from roughly 50 countries live and study together at WMU to serve the global maritime community in the spirit of the United Nations. He also noted the ambition of the Class of 2014 which is the largest class in the 31-year history of WMU, and thanked women in the class who took the initiative to establish the WMU Women’s Association (WMUWA) that aims to support the advancement of female maritime professionals worldwide.

Further, Acting President Bellefontaine announced that just prior to the graduation ceremony, an Agreement was signed with Dr. Vishwapati Trivedi, Secretary for the Ministry of Shipping for the Government of India, to establish an Indian Professorial Chair in Port Management that will support a full professor at WMU for a five-year period. He noted that the new Professorial Chair will benefit maritime capacity building worldwide through supporting the education of students at WMU.

Guest of Honour, Dr. Anne Christine Brusendorff, General Secretary for the International Council for the Exploration of the Sea, encouraged the graduates to be willing to go the extra mile to obtain results, to be fully engaged in the processes at their places of work, and to accept the outcome of decisions. She emphasized the collective nature of teamwork and the global nature of shipping stating, “individually you are one drop, but together, you are an ocean.”

Malmö Mayor and Chairman of the City Council, Kent Andersson, who also serves as a WMU Governor, addressed the graduates reflecting on the many opportunities they had to meet at various functions throughout the year. He noted the changes that have taken place in Malmö as it has transformed from a traditionally Swedish industrial center to a sustainably-oriented international city, and how WMU continues to transform the maritime sector with increased global influence through nearly 4, 000 graduates.

In his remarks, Chancellor Sekimizu noted that the University is entering a new era that is “bolstered by a fresh optimism based on new tools and new capabilities with which to tackle those challenges.” He noted the move of the University to new facilities in the center of Malmö this coming spring, and urged IMO Member States and shipping industry stakeholders to reach out to WMU to support the important transition and the capacity building goals of the University.

Before the conferring of degrees on the graduates, Mr. Sekimizu conferred the degree of Doctor of Science in Maritime Affairs,  honoris causa on Dr. Charles Cushing, President, C.R. Cushing & Co, for his exceptional service to the University since 1986 as a Visiting and Adjunct Professor, teaching both in Malmö and Dalian. Dr. Cushing is recognized internationally in the field of naval architecture and has been responsible for the design, planning and supervision of construction of hundreds of containerships, tankers, barges, LNG ships, tugs, bulk carriers, roll-on, roll-off vessels, passenger ships and other types of vessels. Prior to his graduation from MIT in 1960,  he sailed as a licensed deck officer on a number of U.S. flag general cargo and passenger vessels and has been involved in cargo handling operations on all continents. Professor Cushing is a member of the National Academy of Engineering (USA), Marine Board, Naval Studies Board, MIQC, Webb Institute Board, Global Maritime Training School, and the Maritime Resource Center. Professor Cushing’s achievements have been widely recognized. He has been awarded the Land Medal, been made a member of USMMA Hall of Distinguished Graduates, and received many other honours. In 2013, he published a book entitled Maritime Casualty Safety Investigation.

Three Honorary Fellow Awards were made during the ceremony for distinguished and outstanding service to WMU. The first award was made to Dr. Cleopatra Doumbia-Henry, Director of the International Labour Standards Department of the International Labour Office. Dr. Doumbia-Henry has a long standing relationship with WMU. She was an active guest lecturer who introduced ILO labour standards to WMU students, and with the adoption of the ILO Maritime Labout Convention (MLC) she supported a privileged partnership between WMU and the ILO training centre in Turin, to help the university train MLC instructors. She has served as a member of the WMU Journal Editorial Board since its inception in 2002.

The second Honorary Fellow Award was presented to Dr. Bernard Francou who served from June 1998 to May 2004 as WMU Associate Professor of Port Management. For many years, Dr. Francou served as a UN expert/consultant in shipping and port related projects in Africa, Asia and Latin America. After leaving WMU, Dr. Francou joined the Friends of WMU in France, serving as a very active member in the association, and becoming its Secretary in 2008. He recruited new members including influential personnel in the shipping sector, and promoted WMU to the government, industry and public in France and in search of support to the University. In particular, he was active in the establishment of the French Chair (from 2005 to 2009), the endowment of “The Pierre Houssin Doctoral Suite” (2007), the establishment of “Pierre Léonard Prize for Best Female Graduate” (from 2008), the sponsorship of the WMU minivan (2010) and two joint conferences organized by WMU and French Ministry of Merchant Marine.

The final Honorary Fellow Award was presented to Mr. Jørgen Rasmussen, the former Chief Ship Surveyor and Chief Advisor to the Director-General of the Danish Maritime Authority, former member of the Danish delegation to IMO and former Head of the Navigation Section of IMO’s Maritime Safety Division. In 2007, he received the International Maritime Prize. Mr. Rasmussen has been a Visiting Professor at WMU since 1987,  teaching both in Malmö and Dalian. He has also contributed to WMU’s research and professional development course (PDC) activities, and was the leading author and lecturer for the WMU PDC on “IMO Flag State Implementation Auditors”.

Three Outstanding Alumnus awards were also presented during the ceremony. The first award was made to Professor Gao Deyi (M.Sc. MET-N 1995), Vice-Secretary of the Shanghai Municipal Education Committee. On his return to China after graduation, Professor Deyi became the Vice President of Shanghai Maritime University and has been a key member of the International Maritime Lecturers Assocation (IMLA), hosting both IMLA and IMLA-IMEC conferences at SMU and eventually holding the IMLA Chair. He served in Brussels as Counsellor of the Chinese Mission to the European Community and held the post of Ambassador to the Kingdom of Lesotho. Today Professor Gao is the Deputy Director-General and Spokesperson of the Shanghai Municipal Education Commission, the Shanghai Work Committee for Education and Health and was, until the end of 2013, the Chancellor of the University of Shanghai for Science and Technology. He is currently responsible for Shanghai’s 66 higher universities and colleges that together have 620, 000 students. He is also responsible for primary and secondary education, as well as for the 1200 hospitals in the Shanghai Municipality.

The second Outstanding Alumnus award was presented to Ambassador Extraordinary and Plenipotentiary, Dwight C. Gardiner (M.Sc. MSA(N) 1990),  Director and Registrar General of the Antigua and Barbuda Department of Marine Services and Merchant Shipping. For over thirty years, he has served in a wide range of capacities in the regional and international maritime industry. He has been credited with the expansion of the Antigua and Barbuda Maritime Administration and the simultaneous growth of the shipping registry, positioning it to be one of the leading ship registries in the world. Ambassador Gardiner’s service to the maritime sector via numerous regional and international committees and sub-committees has ensured that Antigua and Barbuda is represented at the global decision-making table regarding international maritime policy, and his efforts have been recognized through several accolades and international awards.

The final Outstanding Alumnus Award was presented toV ice Admiral Rodolfo D. Isorena, Commandant of the Philippine Coast Guard (M.Sc. MSEP 2002). Admiral Isorena is the third consecutive Commandant of the PCG who is a WMU graduate. He holds degrees in criminology, military science and law, as well as a diploma in naval intelligence. He took up his post following the retirement of Admiral Edmund Tan, and worked tirelessly to conclude the discussions on the PCG entering into a MoU with WMU. His efforts resulted in a five-year agreement where the PCG is funding Filipino students to study in the Malmö M.Sc. program.

The annual student awards were also announced at the ceremony. The Chancellor’s Medal for Academic Excellence for the M.Sc. in Maritime Affairs in Malmö was awarded to Gareth John Courtois from the Republic of South Africa, and for the Dalian M.Sc. Program to Shen Jiaqiang from China, and for the Shanghai M.Sc. Program to Hermann Christoph Schulte from Germany. The Pierre Léonard Prize for the Best Female Student was awarded to Deniece Melissa Aiken from Jamaica and Aleik Nurwahyudy from Indonesia received the Lloyd´s Maritime Academy Dissertation Prize. The Informa Law Dissertation Prize was awarded to Ronald Raphael Alfred from Trinidad and Tobago, and the C. P. Srivastava Award for International Fellowship, was awarded to Yusuke Mori from Japan.

The final speaker of the afternoon was the Class of 2014 Student Council President, Abdallah Mohamed Hatimy from Kenya. With words of encouragement for the Class of 2015, and words of thanks for the faculty, staff, and host families, Mr. Hatimy stated that the “[maritime] industry leaders and stakeholders of the future have just been confirmed.” He thanked the Government of Sweden, and the City of Malmö, noting with appreciation the opportunity to live and study in such a beautiful and peaceful city. On behalf of the Class of 2014, he said goodbye to Sweden and WMU stating, “Farewell to you all, a new life is waiting for us.”